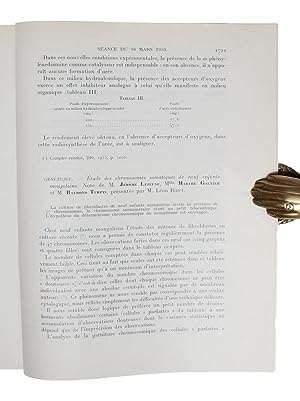 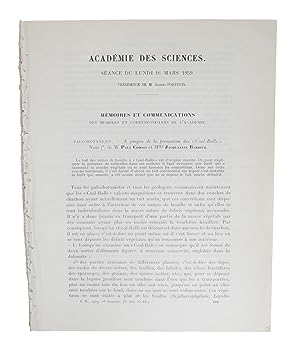 (Paris), 1959. 4to. No wrappers. Fine and clean. The paper: Pp. 1721-22. Entire issue offered pp.: (1597)-1732. First printing of the seminal paper that first described the cause of Down's Syndrome, trisomy-21, or the presence of an extra copy of chromosome 21. "Currently, Down syndrome (DS) is one of the most common birth defects, affecting about one in every 750 live births. John Langdon Down first described this condition in the medical literature in 1866, documenting the various symptoms associated with the syndrome but failing to determine their cause. In fact, the cause of DS remained unknown for nearly 100 years following Down's work. Then, in the 1950s [i.e. in the present paper], researchers finally determined the source of DS: the presence of an extra copy of chromosome 21, a condition often referred to as trisomy 21.Since the discovery of trisomy 21, scientists have made great strides in Down syndrome research." (Clare O'Connor, in: Nature Education)."As previously mentioned, almost 100 years elapsed between Down's medical description of DS and the discovery of the cause of this condition. But why was this the case? It was certainly not for lack of trying. Many theories for the cause of DS were put forth in the century after Down's publication. Some physicians even made the key observation that older mothers had a higherfrequency of DS babies, and they postulated that the condition was caused by what they termed "uterine exhaustion." Gradually, researchers narrowed in on the real cause of DS: achromosomal abnormality. In fact, researchers now realize that older mothers have more babies with DS because the frequency of meiotic nondisjunction increases in women with age.The reason that cytologists in the early twentieth century failed to correctly diagnose DS is almost certainly due to technical limitations. Chromosome 21 is the smallest human chromosome, and procedures for examining human chromosomes were still being developed during the first part of the century. Many early cytologists had, in fact, studied chromosomes from DS patients, but none had been able to detect a supernumerary copy of chromosome 21. A breakthrough finally occurred in 1956, when Joe Hin Tjio and Albert Levan described a set of experimental conditions that allowed them to correctly identify the number of human chromosomes as 46. Within three years of the publication of this groundbreaking work, Jerome Lejeune in France and Patricia Jacobs in the United States were able to identify a supernumerary copy of chromosome 21 in karyotypes prepared from DS patients. Trisomy 21 is now accepted to be the major cause of DS, accounting for about 95% of cases." (Clare O'Connor, in: Nature Education).Garrison & Morton: 4962.5. Codice inventario libreria 50013

Herman H. J. Lynge & Sřn A/S was founded in 1821 and is the oldest antiquarian bookseller in Scandinavia. We specialize mainly in important and rare books in all fields of Science and the Humanities.