Articoli correlati a I. D. 1189. A Manual of Portugese East Africa. Compiled... 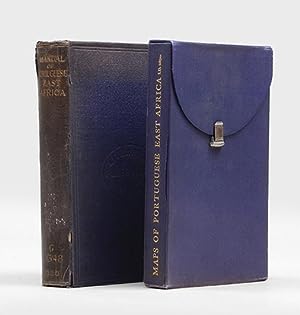 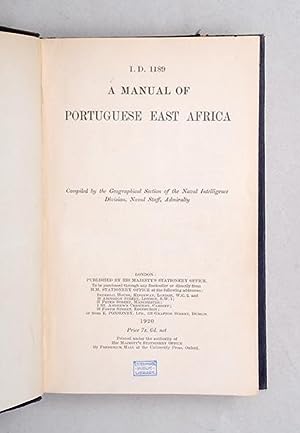 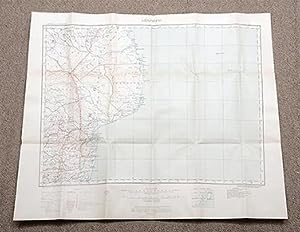 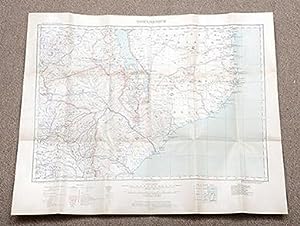 I. D. 1189. A Manual of Portugese East Africa. Compiled by the Geographical Section of the Naval Intelligence Division, Naval Staff, Admiralty. [Together with the accompanying maps and map case].

2 volumes, octavo. Original dark blue cloth, gilt lettered spine, maps in the original dark blue cloth map case with functioning metal clasp. Embossed stamps of Liverpool Free Public library on covers of volume, accession numbers on spine, library label on rear pastedown, small stamps in some margins; binding shaken, inner joints split but quite firm, a few abrasions, map 1 toned. 11 (of 12) maps printed on 10 sheets (maps 6 & 7 printed on the same sheet); lacking map 4 (Mineral Areas). First and only edition, rare: not in Copac (British and Irish institutional libraries) or OCLC (institutional libraries worldwide); KVK locates one copy of the volume only (Österreichische Nationalbibliothek) and there is a complete set of the maps only in the National Library of Australia. A fascinating record of Mozambique drawn up by the Naval Intelligence Division of the Admiralty, including chapters on "Government and Trading Companies", "Mining and other industries", communications, and "Political and Economic Conclusions". The maps include three large folding maps entitled "Mozambique", "Limpopo", and "Zanzibar". In the 19th century "Scramble for Africa" Portugal "claimed a swath of territory from present-day Mozambique to Angola. Although the Germans, whose territory bordered Mozambique to the north, accepted the Portuguese claims - establishing Mozambique's northern boundary - British claims to the region contradicted those of Portugal, leading to prolonged negotiations. However, the Portuguese crown was heavily in debt to British financiers, and the small country was no match for Britain's military; in 1891 Portugal was forced to accept Britain's definition of Mozambique's western and southern boundaries. Portugal had little hope of developing the entire region on its own, and so it turned to its familiar colonial strategy of leasing large tracts of land to private companies. Chartered companies were granted the privilege of exploiting the lands and peoples of specific areas in exchange for an obligation to develop agriculture, communications, social services, and trade. The Mozambique Company, the Niassa Company, and the Zambezia Company [controlled and financed by the British] were all established in this manner in the 1890s. Any economic development and investment in infrastructure was related directly to company interests and usually undertaken at African expense. Sugar, copra, and sisal plantations depending largely on conscripted labour and railways linking Beira with the British South Africa Company territory and British Nyasaland to the west and northwest were all developed and built at a high cost to the African workforce" (Encyclopaedia Britannica online). Codice inventario libreria 107217


All major credit cards are accepted. Both UK pounds and US dollars (exchange rate to be agreed) accepted. Books may be returned within 14 days of purchase for any reason, but please notify first of returned goods.


All shipped items are expertly packed and fully insured. All books to be sent by Recorded Delivery (UK) or signed-for Air Mail (overseas) service. UPS Express shipping also available. Packaging and insurance costs are included. Orders usually ship within 2 business days. Shipping costs are based on books weighing 2.2 LB, or 1 KG. If your book order is heavy or oversized, we may contact you to let you know extra shipping is required.