Articoli correlati a Sharpe’s Siege: The Winter Campaign, 1814 (The... 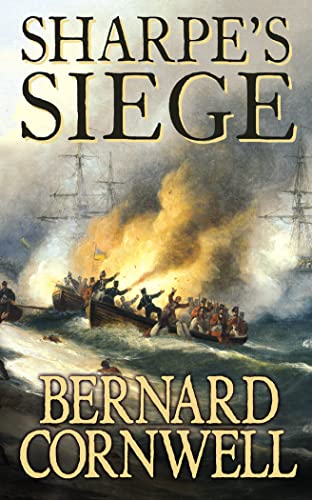 A classic Sharpe adventure: Richard Sharpe and the Winter Campaign, 1814.

The invasion of France is under way, and the British Navy has called upon the services of Major Richard Sharpe. He and a small force of Riflemen are to capture a fortress and secure a landing on the French coast. It is to be one of the most dangerous missions of his career.

Through the incompetence of a recklessly ambitious naval commander and the machinations of his old enemy, French spymaster Pierre Ducos, Sharpe finds himself abandoned in the heart of enemy territory, facing overwhelming forces and the very real prospect of defeat. He has no alternative but to trust his fortunes to an American privateer – a man who has no love for the British invaders.

‘Sharpe and his creator are national treasures.' Sunday Telegraph

'Bernard Cornwell is a literary miracle. Year after year, hail, rain, snow, war and political upheavals fail to prevent him from producing the most entertaining and readable historical novels of his generation.' Daily Mail

Bernard Cornwell worked for BBC TV for seven years, mostly as producer on the Nationwide programme, before taking charge of the current Affairs department in Northern Ireland. In 1978 he became editor of Thames Television’s Thames at Six. Married to an American, he now lives in the United States.