Articoli correlati a Jack and Bobby: A story of brothers in conflict

McKinstry, Leo Jack and Bobby: A story of brothers in conflict

Jack and Bobby: A story of brothers in conflict 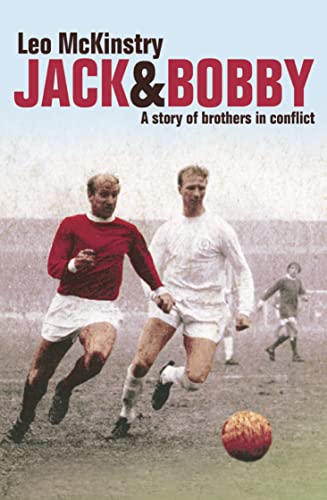 The history of modern British football can largely be written through the stories of Jack and Bobby Charlton. Both were in the World Cup winning team of ‘66, and each has remained deeply involved in the game ever since.

The book traces the parallel lives of Jack and Bobby Charlton, following them from their schooldays through to the present day.

The brothers both played prominent roles in the finest hour of English football, the 1966 World Cup triumph. Each played for the dominant club of their era, and summed up the style of their respective teams.

Bobby was at Manchester Utd during their glory days under Sir Matt Busby. He survived the Munich air crash and went on to become a fast, graceful attacker who set grounds alight with his power, speed and athleticism in a team that played free-flowing, attacking football.

Jack came to professional football late, working in a coal mine before Leeds signed him. Don Revie’s Leeds side was renowned for its uncompromising and physical style, and Jack was himself a tough, durable and aggressive defender, who once caused uproar by admitting he had a ‘black book’ with a list of footballing enemies who he would target on the pitch.

The two retired from football in the same year, and since, the contrast between them has been marked. Bobby’s forays into management at Wigan and Preston were distinguished only by their brevity, while ‘Big Jack’ took the Republic of Ireland team to an unprecendented level of success, reaching the quarter finals of the World Cup in 1994. Bobby has been a key figure in the ongoing success of Manchester United over the past decade, working on recruiting players and as an FA diplomat.

But, despite their continued successes, the relationship between the two has been strained, sometimes barely even polite, and the book will investigate the reasons for this, including in-depth interviews with many of those the two have been in contact with over the years.

Leo McKinstry writes regularly for the Daily Mail, the Sunday Telegraph and the Spectator magazine on a wide range of subjects. He has written several previous books, including the Geoff Boycott biography ‘Boycs: the true story’, which the Telegraph described as “the best cricket book of the summer.”