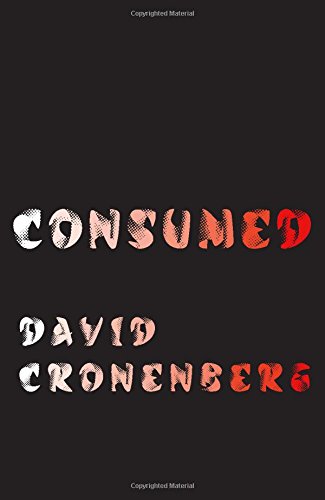 The debut novel by the iconic film director.

Stylish and tech-obsessed, Naomi and Nathan thrive on the yellow journalism of the social-media age. They are lovers and competitors – nomadic freelancers in pursuit of sensation and depravity, encountering each other only in airport hotels and browser windows.

Naomi finds herself drawn to the headlines surrounding Célestine and Aristide Arosteguy, Marxist philosophers and sexual libertines. Célestine has been found dead and mutilated in her Paris apartment. Naomi sets off on the trail of Aristide, who has fled the country. But the truth behind the murder is disturbing and deadly.

Nathan, meanwhile, has contracted a rare STD called Roiphe’s. He travels to Toronto, determined to meet the man who discovered the syndrome. Dr. Barry Roiphe, now studies his own adult daughter, whose bizarre behaviour masks a devastating secret.

These parallel narratives become entwined in a gripping, dreamlike plot that involves geopolitics, 3-D printing, North Korea, the Cannes Film Festival, cancer, and, in an incredible number of varieties, sex. ‘Consumed’ is an exuberant, provocative debut novel from one of the world’s leading film directors.

‘CONSUMED is an eye-opening dazzler. Not for the fainthearted, but for those of us who relish a trip into the shadowy depths, a must-read. Cronenberg's novel is as troubling, sinister, and as enthralling as his films’ Stephen King

‘Classic Cronenberg! Who else can tell such a frightening, thrilling, shocking story about the nexus of the spirit and the flesh? CONSUMED will, well, consume you’ J. J. Abrams

‘Like a mashup of William Gibson, the king of near-future SF cool, and 1970s horror maestro James Herbert ... an intense and surreal modern vision of the thousand unnatural shocks that flesh is heir to’ Guardian

‘[CONSUMED] involves cannibalism, perversity and philosophy, as though Jean-Paul Sartre were dining with Hannibal Lecter ... It is compelling in its scabrous transgression, daring in its tackling of taboos such as geriatric sex ... You’ve got to hand it to Cronenberg – at 71 he has written a first novel as provocative and neo-adolescent as they come’ The Times

'An astonishing, seamless continuation of what I call his peerless novelistic film oeuvres. With CONSUMED, he has become the definitive heir, not just of Kafka and Borges, but of Cronenberg himself' Bruce Wagner

‘Delicious, and ... no end of wicked fun’ Independent

‘Cronenberg’s first novel is so good, he should ditch his day job ... There is more than enough body horror in CONSUMED to satisfy fans of Cronenberg’s The Fly or Videodrome but at its core is a nuanced and moving examination of what it means to age, to become ill and to die in a rampantly technologised age. CONSUMED may not be to everyone’s taste but, for connoisseurs of Burroughs, Ballard and DeLillo, it’s a delightful and unexpected smorgasbord’ New Statesman

‘Aficionados of Croneberg’s cinematic work will not be surprised to find a lot of exquisitely detailed, voyeuristic body-horror’ Guardian

David Cronenberg is an internationally renowned and award-winning filmmaker and screenwriter. Often controversial and shocking in their subject matter his films include The Fly, Videodrome, Naked Lunch (based on the William Burroughs’ novel), Crash (based on J.G. Ballard’s), Spider (based on Patrick McGrath’s), and, most recently, The History of Violence and Eastern Promises. He lives in Toronto.

Descrizione libro Hardcover. Condizione: New. Condizione sovraccoperta: New. 1st Edition. David Cronenberg Consumed First Edition First Printing Signed & Sealed NEW will be sent boxed and via a signed for method of postage Extra postage will be needed for overseas orders if the weight exceeds one kilo book is signed without dedication unless stated otherwise. All books come with a lifetime guarantee No Coa's issued unless the book originally came with one then it will be included with the book. Signed by Author. Codice articolo ABE-1566296427584