Articoli correlati a BURIED FOR PLEASURE 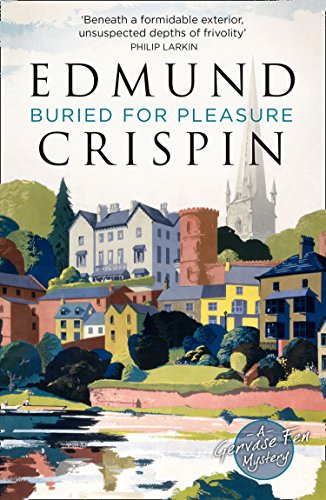 As inventive as Agatha Christie, as hilarious as P.G. Wodehouse - discover the delightful detective stories of Edmund Crispin. Crime fiction at its quirkiest and best.

In the sleepy English village of Sanford Angelorum, professor and amateur detective Gervase Fen is taking a break from his books to run for Parliament. At first glance, the village he's come to canvass appears perfectly peaceful, but Fen soon discovers that appearances can be deceptive: someone in the village has discovered a dark secret and is using it for blackmail. Anyone who comes close to uncovering the blackmailer's identity is swiftly dispatched.

As the joys of politics wear off, Fen sets his mind to the mystery but finds himself caught up in a tangled tale of eccentric psychiatrists, escaped lunatics, beautiful women and lost heirs.

Erudite, eccentric and entirely delightful – Before Morse, Oxford’s murders were solved by Gervase Fen, the most unpredictable detective in classic crime fiction.

‘Crispin isn't in it for the mystery, but for the enigmas’ Guardian

‘His books are full of high spirits and excellent jokes, with constant literary allusions and an atmosphere of bibulous good humour. But at times the mood turns darker, and Crispin is capable of passages of both genuine suspense and ingenius deduction’ Daily Telegraph

Robert Bruce Montgomery was born in Buckinghamshire in 1921, and was a golden age crime writer as well as a successful concert pianist and composer. Under the pseudonym Edmund Crispin, he wrote nine detective novels and 42 short stories, combining farcical situations with literary references and sharply observed characterisation. His professional film scores included the well-known scores for the Carry On series. Montgomery graduated from St. John’s College, Oxford in 1943 and was part of a famous literary circle including Kingsley Amis and Philip Larkin. In addition to his reputation as a leader in the field of mystery genre, he was the regular crime-fiction reviewer for the Sunday Times from 1967 and contributed to many periodicals and newspapers and edited science-fiction anthologies. After the golden years of the 1950s he retired from the limelight to live out a hermetic existence in Totnes in Devonshire until his death in 1978.