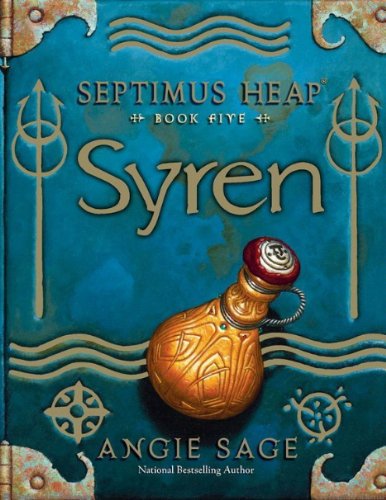 In the fifth book of the Magykal series, Septimus and his friends wind up on an island whose secrets are as dark and dangerous as its inhabitants. Septimus Heap returns to the House of Foryx with Spit Fyre to pick up Jenna, Nicko, Snorri, and Beetle. Of course, the journey homeward does not go so well. Septimus and his friends are caught in a storm and Spit Fyre crashes into the Rokk Lighthouse. They are rescued by the lighthouse keeper a very bad guy and his cat, who we re not so sure about either. And all the while, Septimus is trying to fight the pull he s feeling to the Islands and their mysterious secrets.

Mark Zug has loved fantasy novels since he was a teenager. He has illustrated many collectible card games, including Magic: The Gathering and Dune, as well as books and magazines. He lives in Pennsylvania.

Descrizione libro Harper Collins Us ?. Perfect Paperback. Condizione: GOOD. Spine creases, wear to binding and pages from reading. May contain limited notes, underlining or highlighting that does affect the text. Possible ex library copy, thatâ ll have the markings and stickers associated from the library. Accessories such as CD, codes, toys, may not be included. Codice articolo 3177711534

Descrizione libro Paperback. Condizione: Very Good. The book has been read, but is in excellent condition. Pages are intact and not marred by notes or highlighting. The spine remains undamaged. Codice articolo GOR003383001

Descrizione libro Bloomsbury Publishing PLC, 2009. Perfect Paperback. Condizione: Good. Good solid copy, mild to moderate reading/age wear, no DJ if issued, may have some light markings or exowner inscription. We take great pride in accurately describing the condition of our books and media, ship within 48 hours, and offer a 100% money back guarantee. Codice articolo mon0000126672