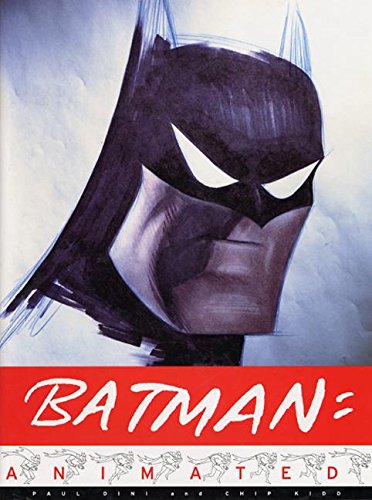 From Emmy Award-winning-producer Paul Dini and acclaimed designer Chip Kidd comesBatman Animated, the behind-the-scenes story of the hit show that revolutionized television animation and brought a stunning new look to the legendary Caped Crusader. Since its premiere in September 1992,Batman: The Animated Series has been acclaimed by enthusiastic viewers and longtime fans of the Batman character as the defining image of the Dark Knight onscreen.

Now readers are offered an inside look into the creation of the series. Granted unprecedented access to the archives of the Warner Bros. Animation Studio, Chip Kidd has combined breathtaking photographs by Award-winning photographer Geoff Spear and fashioned an imaginative layout of never-before-published preproduction and finished artwork that echoes the boldness of producer-designer Bruce Timm's powerful TV show.

Paul Dini's text offers entertaining and informative commentary on the series history, development, and continuing production. It includes glimpses into the making of the Batman animated featuresMask of the Phantasm and SubZero, and a sneak peek into the future projects.

Featuring a detailed episode guide, comments from the series creators and voice actors, and an introduction by Bruce Timm,Batman Animated is a must-have for Batman fans young and old.

Paul Dini has been making cartoons at Warner Bros. since 1989. Starting with Steven Spielberg Presents Tiny Toons Adventures, he went on to write (and eventually coproduce) Batman: The Animated Series. He won four Emmys, three comics industry Eisner awards, and has, within the space of sixteen years, written more cartoons than most sane people will see in a lifetime. He lives in Los Angeles.