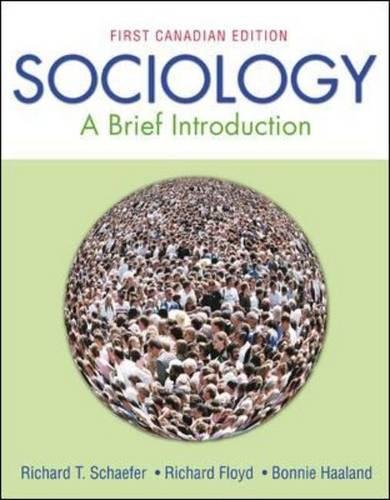 Sociology: A Brief Introduction, First Canadian Edition provides a balanced introduction to the four core sociological theories (functionalist, interactionist, conflict, and feminist) while offering Canadian students valuable applications in Taking Sociology to Work boxes, end-of-chapter Social Policy sections, and Internet Connection exercises. With a commitment to Canadian content and a global focus, this text encourages students to reflect critically on the world in which they live and gives them the tools they need to hone their "sociological imagination."

Growing up in Chicago at a time when neighbourhoods were going through transitions in ethnic and racial composition, Richard T. Schaefer found himself increasingly intrigued by what was happening, how people were reacting, and how these changes were affecting neighbourhoods and peoples jobs. His interest in social issues caused him to gravitate to sociology courses at Northwestern University, where he eventually received a BA in sociology.Originally as an undergraduate I thought I would go on to law school and become a lawyer. But after taking a few sociology courses, I found myself wanting to learn more about what sociologists studied, and fascinated by the kinds of questions they raised. This fascination led him to obtain his MA and PhD in sociology from the University of Chicago. Dr. Schaefers continuing interest in race relations led him to write his masters thesis on the membership of the Ku Klux Klan and his doctoral thesis on racial prejudice and race relations in Great Britain.Dr. Schaefer went on to become a professor of sociology and now teaches at DePaul University in Chicago. In 2004 he was named to the Vincent DePaul professorship in recognition of his undergraduate teaching and scholarship. He has taught introductory sociology for over 35 years to students in colleges, adult education programs, nursing programs, and even a maximum-security prison. Dr. Schaefers love of teaching is apparent in his interaction with his students. I find myself constantly learning from the students who are in my classes and from reading what they write. Their insights into the material we read or current events that we discuss often become part of future course material and sometimes even find their way into my writing.Dr. Schaefer is author of the eleventh edition of Sociology (McGraw-Hill, 2008) and of the fourth edition of Sociology Matters (McGraw-Hill, 2009). He is also the author of Racial and Ethnic Groups, now in its eleventh edition, and Race and Ethnicity in the United States, fifth edition. Together with William Zellner, he co-authored the eighth edition of Extraordinary Groups, published by Worth in 2007. Dr. Schaefer served as the general editor of the three-volume Encyclopedia of Race, Ethnicity, and Society, published by Sage in 2008. His articles and book reviews have appeared in many journals, including American Journal of Sociology, Phylon: A Review of Race and Culture, Contemporary Sociology, Sociology and Social Research, Sociological Quarterly, and Teaching Sociology. He served as president of the Midwest SociologicalSociety in 19941995.Dr. Schaefers advice to students is to look at the material and make connections to your own life and experiences. Sociology will make you a more attentive observer of how people in groups interact and function. It will also make you more aware of peoples different needs and interestsand perhaps more ready to work for the common good, while still recognizing the individuality of each person.

What is Sociological Theory?

The Development of Sociology

What is the Scientific Method?

Development of Culture around the World

Culture and the Dominant Ideology

The Role of Socialization

The Self and Socialization

Socialization and the Life Course

Social Policy and Socialization: Day Care around the World

Social Policy and Social Control: Illicit Drug Use in Canada

Chapter 8: Stratification in Canada and Worldwide

Stratification in the World System

Stratification within Nations: A Comparative Perspective

Race and Ethnicity in Canada

Chapter 11: The Family and Intimate Relationships

Global View of the Family

Durkheim and the Sociological Approach to Religion

The Role of Religion

Chapter 13: Government and the Economy

Models of Power Structure in Canada

Demography: The Study of Population

Sociological Perspectives on Health and Illness

Chapter 15: Communities and the Environment

How Did Communities Originate?

Technology and the Future