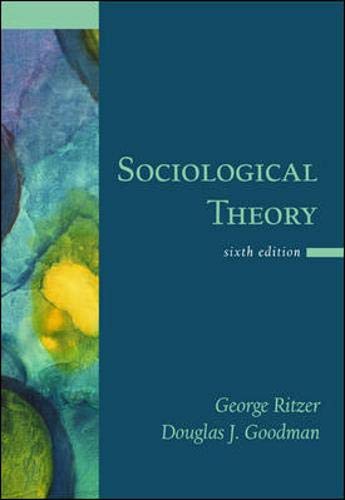 Written by one of the foremost authorities in the world on sociological theory and a junior colleague (and former student) who specializes, and has already published widely, in theory, this market-leading text gives readers a comprehensive overview of the major classical theorists and contemporary schools of sociological thought. It spans the history of sociological theory from its inception to the latest theoretical developments. Key theories are integrated with biographical sketches of the lives of theorists to place readings in their personal and historical context for students. This book provides students with the context to understand the original works of classical authors as well as the framework to compare and contrast the newest substantive theories that they have learned in other sociology courses. The sixth edition has been thoroughly updated and revised to reflect current debates in sociology and includes completely new sections on Actor-Network theory, neo-Marxian theories of space, chaos in social theory and theories of globalization.

George Ritzer is Distinguished University Professor at the University of Maryland, where he has been a Distinguished Scholar-Teacher and won a Teaching Excellence award by the American Sociological Association, and in 2004, he was awarded an honorary doctorate by LaTrobe University, Melborune, Australia. He has served as Chair of the American Sociological Association's Sections on Theoretical Sociology and organizations and Occupations. He held the UNESCO Chair in Social Theory at the Russian Academy of Sciences, a Fulbright-Hay Chair at York University in Canada, and a Fulbright-Hays award to the Netherlands. He has been Scholar-in-Residence at the Netherlands Institute for Advanced Study and the Swedish Collegium for Advanced Study in the Social Sciences. Dr. Ritzer's main theoretical interests lie in metatheory as well as applied social theory. In metatheory, his contributions include Metatheorizing in Sociology(Lexington Books, 1991), Sociology: A Multiple Paradigm Science (Allyn and Bacon, 1975, 1980), and Toward an Integrated Sociological Paradigm (Allyn and Bacon). Professor Ritzer is perhaps best known for the McDonaldization of Society (4/e, 2004); translated into more than a dozen languages) and several related books (also with a number of translations, including Expressing America: A Critique of the Global Credit Card Society (1995), Enchanting a Disenchanted World: Revolutionizing the Means of Consumption (2/e, 2005),The Globalization of Nothing (2/e, 2007), and (with Craig Lair) Outsourcing: Globalization and Beyond. He edited the Encyclopedia of Social Theory (2005), and is the founding editor of the Journal of Consumer Culture. He just completed editing the eleven-volume Encyclopedia of Sociology (2007) and The Blackwell Companion to Globalization (2007). In 2006, McGraw-Hill published the second edition of Professor Ritzer's Contemporary Sociological Theory and Its Classic Roots: The Basics. In 2007, McGraw-Hill will publish the seventh edition of Modern Sociological Theory, and the fifth edition of Classical Sociological Theory. The latter texts, as well as this one, have been translated into a number of languages.

Descrizione libro McGraw-Hill, 2003. Condizione: Fair. This is an ex-library book and may have the usual library/used-book markings inside.This book has soft covers. In fair condition, suitable as a study copy. Please note the Image in this listing is a stock photo and may not match the covers of the actual item,1100grams, ISBN:9780071232678. Codice articolo 8405841

Descrizione libro McGraw-Hill Higher Education, 2003. Paperback. Condizione: Good. Minor Shelfwear. Tan to the page edges. There are some pages with some sentences highlighted. Text fully legible. Good condition is defined as: a copy that has been read but remains in clean condition. All of the pages are intact and the cover is intact and the spine may show signs of wear. The book may have minor markings which are not specifically mentioned. Most items will be dispatched the same or the next working day. Codice articolo mon0013479800

Descrizione libro McGraw-Hill Higher Education, 2003. Paperback. Condizione: Very Good. Very Good: a copy that has been read, but is in excellent condition. Pages are intact and not marred by notes or highlighting. The spine remains undamaged. Most items will be dispatched the same or the next working day. Codice articolo wbb0015912651

Descrizione libro McGraw-Hill Education, 2003. Paperback. Condizione: Very Good. 6th. The book has been read, but is in excellent condition. Pages are intact and not marred by notes or highlighting. The spine remains undamaged. Codice articolo GOR001747625