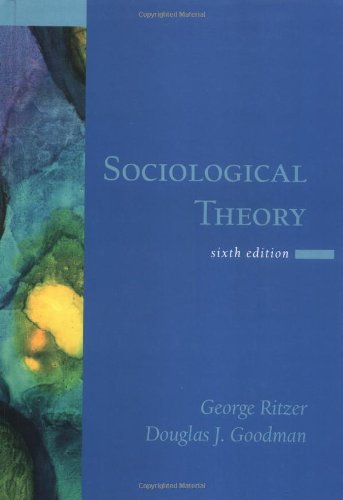 With one of the foremost authorities on sociological theory as lead author, this best-selling text gives readers a comprehensive overview of the major classical theorists and contemporary schools of sociological thought. Spanning the history of sociological theory from its inception to the latest theoretical developments, it integrates key theories with biographical sketches of theorists, placing readings in context and helping students understand the original works of classical authors as well as compare and contrast the newest substantive theories.

George Ritzer is Distinguished University Professor at the University of Maryland where he has also been a Distinguished Scholar-Teacher and won a Teaching Excellence Award. He was awarded the 2000 Distinguished Contributions to Teaching Award by the American Sociological Association. He has served as Chair of two Sections of the American Sociological Association- Organizations and Occupations and Theoretical Sociology. In addition to The McDonaldization of Society (1993, 1996, 2000; translated into a dozen languages), his other efforts to apply social theory to the everyday realms of the economy and consumption include Expressing America: A Critique of the Global Credit Card Society (1995), The McDonaldization Thesis: Explorations and Extensions (1998), and Enchanting a Disenchanted World: Revolutionizing the Means of Consumption (1999). At the other end of the spectrum, his contributions to metatheorizing include Sociology: A Multiple Paradigm Science (1975), Toward an Integrated Sociological Paradigm (1981), and Metatheorizing in Sociology (1991). He has recently edited The Blackwell Companion to Major Social Theorists (2000), as well as The Handbook of Social Theory (with Barry Smart), and is co-founding editor (with Don Slater) of the Journal of Consumer Culture. In 2001 Sage of England published two volumes of his collected works- Explorations in Social Theory: From Metatheorizing to Rationalization and Explorations in the Sociology of Consumption: Fast Food Restaurants, Credit Cards and Casinos. Among his forthcoming works are the Handbook of International Social Problems and the two-volume Encyclopedia of Social Theory. His next original book, The Globalization of Nothing: So Many Making So Much of So Little will be published in 2003. In 2002 McGraw-Hill published Ritzer’s Contemporary Sociological Theory and Its Classical Roots: The Basics.

Chapter 1: A Historical Sketch of Sociological Theory: The Early Years

Chapter 6: A Historical Sketch of Sociological Theory: The Later Years

PART 4: From Modern to Postmodern Social Theory (and Beyond)