Articoli correlati a Fundamentals of Aerodynamics 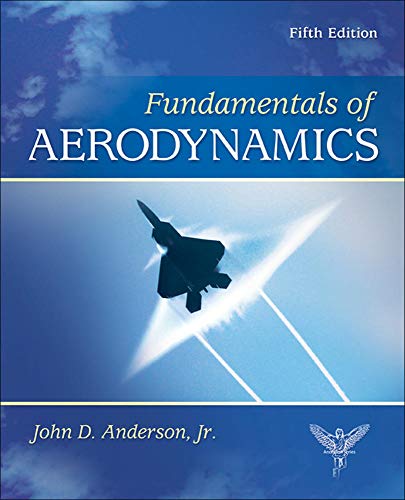 In keeping with its bestselling previous editions, Fundamentals of Aerodynamics, Fifth Edition by John Anderson, offers the most readable, interesting, and up-to-date overview of aerodynamics to be found in any text.

The classic organization of the text has been preserved, as is its successful pedagogical features: chapter roadmaps, preview boxes, design boxes and summary section. Although fundamentals do not usually change over time, applications do and so various detailed content is modernized, and existing figures are replaced with modern data and illustrations. Historical topics, carefully developed examples, numerous illustrations, and a wide selection of chapter problems are found throughout the text to motivate and challenge students of aerodynamics.

2 Aerodynamics: Some Fundamental Principles and Equations

15 Introduction to the Fundamental Principles and Equations of Viscous Flow

Descrizione libro McGraw-Hill Education. soft cover. Condizione: New. International Edition. No supplemental materials. International Editions may have a different cover or ISBN but generally have the exact same content as the US edition, just at a more affordable price. In some cases, end of chapter questions may vary slightly from the US edition. International Editions are typically printed in grayscale, and likely will not have any color throughout the book. New. Books ship from multiple locations depending on availability. All orders are shipped with tracking information. We take pride in our customer service. Please contact us if you have any questions regarding this listing. Codice articolo 9441

Descrizione libro McGraw-Hill Education, 2010. Softcover. Condizione: New. ***International Edition***Soft cover/Paperback*** Textbook printed in English. ***Brand New***. Most international edition has different ISBN and Cover design. Some book may show sales disclaimer such as "Not for Sale or Restricted in US" on the cover page but it is absolutely legal to use. All textbook arrives within 5-7business days. Please provides valid phone number with your order for easy delivery. Codice articolo 9780073398105