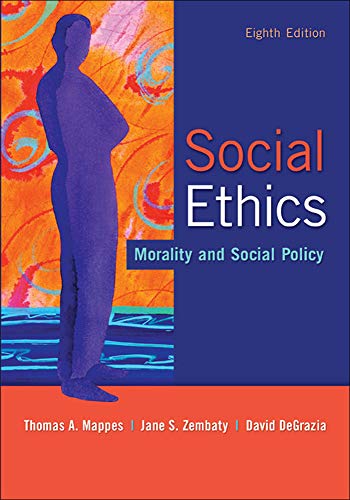 With an assortment of readings and perspectives from some of the most respected thinkers of our time, Social Ethics: Morality and Social Policy provides a balanced, engaging introduction to today’s most pressing social and moral problems. This highly popular anthology illuminates the issues at the heart of each contemporary problem and encourages critical, fair-minded examination of varying viewpoints―all presented in the words of those who embrace them. Helpful editorial features include substantial chapter introductions, a summary preceding each selection, discussion questions, and bibliographies for further reading.

Thomas A. Mappes holds a B.S. in chemistry from the University of Dayton and a Ph.D. in philosophy from Georgetown University. He is professor of philosophy at Frostburg State University, where he has taught since 1973. He is the coeditor (with Jane S. Zembaty) of Social Ethics: Morality and Social Policy (McGraw-Hill, 4/e, 1992) and his published work appears in journals such as American Philosophical Quarterly and Kennedy Institute of Ethics Journal. In 1985, the Frostburg State University Foundation presented him with the Faculty Achievement Award for Teaching.

Jane S. Zembaty, professor of philosophy at the university of Dayton, specializes in classical Greek philosophy and social ethics. She coedited the first three editions of Biomedical Ethics, and her published work includes articles on Greek philosophy, such as "Plato's Republic and Greek Morality on Lying" and "Aristotle on Lying."