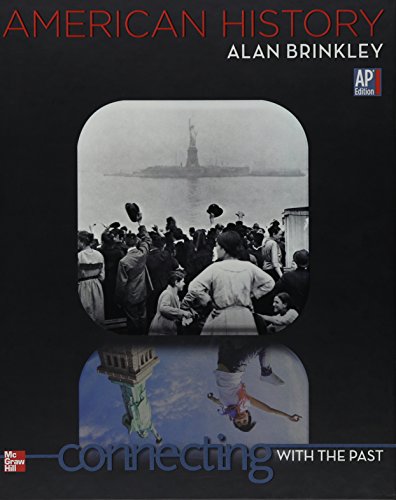 Aligned to the latest AP standards, American History, AP edition, shows students that history is not just a collection of names and dates, but an ongoing story which teaches us about the present as well as the past! Known for its clear narrative voice and impeccable scholarship, Alan Brinkley's best-selling text invites students to think critically about the many forces that continually create the United States. In a concise but wide-ranging narrative, Brinkley shows the diversity and complexity of the nation and of our understanding of its history―an understanding that continues to evolve both in the events of the present and in our reexamination of new evidence and perspectives on the past. This 14th edition features a new series of Consider the Source essays, a brand new pedagogy program, four new America in the World essays, and extensive content updates that demonstrate how a new generation of historians and of historical actors continues to shape the American story.

In addition to being a best selling textbook author, ALAN BRINKLEY is the Allan Nevins Professor of History and former Provost at Columbia University. He is the author of Voices of Protest: Huey Long, Father Coughlin, and the Great Depression, which won the 1983 National Book Award; The End of Reform: New Deal Liberalism in Recession and War; and Liberalism and its Discontents. His most recent books are John F. Kennedy: The American Presidents Series: The 35th President, 1961-1963 and The Publisher: Henry Luce and His American Century both published recently. He was educated at Princeton and Harvard and taught previously at MIT, Harvard, and the City University Graduate School before joining the Columbia faculty In 1991. In 1998-1999, he was the Harmsworth Professor of American History at Oxford University. He won the Joseph R. Levenson Memorial Teaching Award at Harvard in 1987 and the Great Teacher Award at Columbia in 2003. He is a member of the American Academy of Arts and Sciences, a member of the board of trustees of the National Humanities Center and Oxford University Press, and chairman of the board of trustees of the Century Foundation. He has been a visiting professor at Princeton, the Ecole des Hautes Etudes en Sciences Sociales (Paris), and the University of Torino (Italy). He was the 1998-1999 Harmsworth Professor of American History at Oxford University.

2. American History: Connecting With the Past - Ap Edition