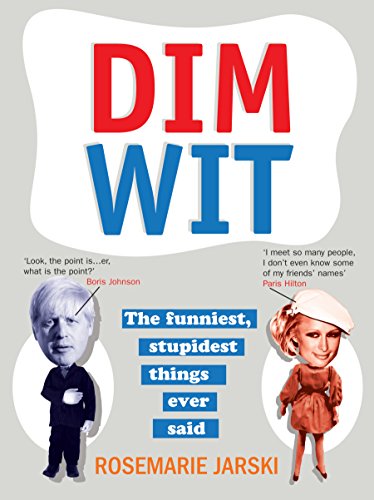 'They misunderestimated me' George W. Bush

Einstein said only two things are infinite - the universe and human stupidity. So in deference to the dumbing down of our culture, comes Dim Wit - a collection of the most jaw-droppingly stupid things ever said. The cast includes every famous foot-in-mouther from George W Bush to Prince Philip, Paris Hilton to Jade Goody, not to mention hundreds of unsung idiots plucked from villages the world over.

The result is a confederacy of dunces more pro-fun than profound - a clever witticism may coax an inward smile but it takes a really stupid remark to deliver a belly laugh. So pick up Dim Wit and prepare to embrace your inner moron - it may be the smartest thing you do...

'My grandma overheard two women talking in a doctor's surgery. After a while, one said to the other, "Do you know, Mary, I don't feel too well. I think I'll go home."' - Robyn Jankel

'I don't think anyone should write his autobiography until after he's dead.' - Samuel Goldwyn

'Winston Churchill? Wasn't he the first black President of America? There's a statue of him near me - that's black.' - Danielle Lloyd

From the bestselling author of Great British Wit and The Funniest Thing You Never Said comes Dim Wit - the definitive collection of quotes from a star-studded array of dunces, idiots and morons

Rosemarie Jarski is a screenwriter dividing her time between Britain and the States. Her book publications include Wisecracks and Hollywood Wit, anthologies of on- and off-screen Hollywood quotations, a spoof guide How to Be A Celebrity, and the bestselling humorous quotations books: The Funniest Thing You Never Said, Great British Wit and A Word from the Wise.