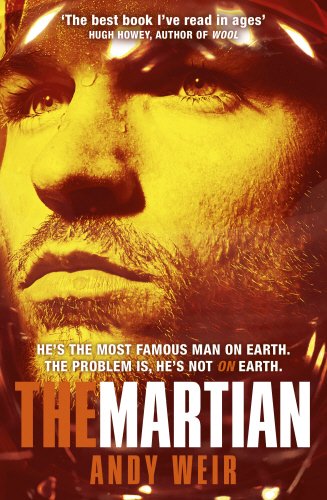 I'm stranded on Mars. I have no way to communicate with Earth. I'm in a Habitat designed to last 31 days. If the Oxygenator breaks down, I'll suffocate. If the Water Reclaimer breaks down, I'll die of thirst. If the Hab breaches, I'll just kind of explode. If none of those things happen, I'll eventually run out of food and starve to death. So yeah. I'm screwed.

"Watney's gallows humour and his brushes with death as he uses every ounce of his intelligence and astronaut's training to claw his way out of the pit will have you laughing and gasping by turns. I read this book in a weekend. I didn't think I'd have the time to - but Andy Weir's edge-of-the-seat storytelling didn't leave me any choice." (Richard Madeley, Richard and Judy Book Club)

"Andy Weir's terrific 'lost in space' novel is an absolute page turner from first to last ... Tautly-written, full of extraordinary and fascinating detail about life in a frozen red desert so far from home, The Martian is one of the best thrillers either of us has read in years. Highly recommended." (Judy Finnigan, Richard and Judy Book Club)

"The best book I've read in ages. Clear your schedule before you crack the seal. This story will take your breath away faster than a hull breech. Smart, funny, and white-knuckle intense, The Martian is everything you want from a novel." (Hugh Howey New York Times bestselling author of Wool)

"The amount of research here is astounding. We're suckers for well-grounded fiction, and on the technical side, The Martian is exemplary ... witty ... funny" (SFX)

"A book I just couldn't put down! It has the very rare combination of a good, original story, interestingly real characters and fascinating technical accuracy.reads like MacGyver meets Mysterious Island." (Astronaut Chris Hadfield Commander of the International Space Station and author of An Astronaut's Guide to Life on Earth)

Robinson Crusoe on Mars - a survival story for the 21st Century

Descrizione libro Paperback. Condizione: Fair. A readable copy of the book which may include some defects such as highlighting and notes. Cover and pages may be creased and show discolouration. Codice articolo GOR008072021

Descrizione libro Twentieth Century-Fox. Paperback. Condizione: Good. A copy that has been read, but remains in clean condition. All pages are intact, and the cover is intact. The spine may show signs of wear. Pages can include limited notes and highlighting, and the copy can include previous owner inscriptions. At ThriftBooks, our motto is: Read More, Spend Less. Codice articolo G0091956447I3N00

Descrizione libro Twentieth Century-Fox., 2014. Condizione: Good. Ships from the UK. Shows some signs of wear, and may have some markings on the inside. Codice articolo GRP105424301

Descrizione libro -. Paperback. Condizione: Very Good. The Martian This book is in very good condition and will be shipped within 24 hours of ordering. The cover may have some limited signs of wear but the pages are clean, intact and the spine remains undamaged. This book has clearly been well maintained and looked after thus far. Money back guarantee if you are not satisfied. See all our books here, order more than 1 book and get discounted shipping. Codice articolo 7719-9780091956448

Descrizione libro - -. Paperback. Condizione: Very Good. This book is in very good condition and will be shipped within 24 hours of ordering. The cover may have some limited signs of wear but the pages are clean, intact and the spine remains undamaged. This book has clearly been well maintained and looked after thus far. Money back guarantee if you are not satisfied. See all our books here, order more than 1 book and get discounted shipping. Codice articolo 6545-9780091956448

Descrizione libro Del Rey, 2014. Paperback. Condizione: Used; Good. **Simply Brit** Shipped with Premium postal service within 24 hours from the UK with impressive delivery time. We have dispatched from our book depository; items of good condition to over ten million satisfied customers worldwide. We are committed to providing you with reliable and efficient service at all times. Codice articolo 1435294

Descrizione libro Del Rey, 2014. Paperback. Condizione: Used; Good. Stains on Sides **SHIPPED FROM UK** We believe you will be completely satisfied with our quick and reliable service. All orders are dispatched as swiftly as possible! Buy with confidence!. Codice articolo 3544674

Descrizione libro Twentieth Century-Fox., 2014. Condizione: Good. A+ Customer service! Satisfaction Guaranteed! Book is in Used-Good condition. Pages and cover are clean and intact. Used items may not include supplementary materials such as CDs or access codes. May show signs of minor shelf wear and contain limited notes and highlighting. Codice articolo 0091956447-2-4

Descrizione libro Del Rey, 2014. Paperback. Condizione: Very Good. Very Good or better unused condition. This book is in stock now, in our UK premises. Photos of most of our books are available - please ask, as dustjacket and cover illustrations vary, and unless the accompanying image is marked 'Bookseller Image', it is an Abebooks Stock Image, NOT our own. Overseas buyers also note that shipping rates apply to packets of 750g and under, and should the packed weight of an item exceed this we reserve the right to ship via 'Economy', or request extra postage prior to fulfilling the order, or cancel. Codice articolo mon0000104636