Articoli correlati a Network Security: Private Communication in a Public... 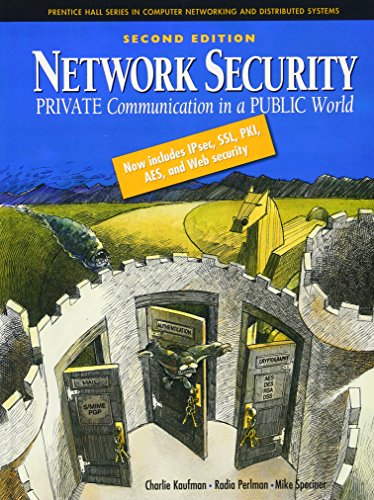 The classic guide to network and Internet security has been thoroughly updated for today's latest security threats. In the second edition of Network Security, this most distinguished of author teams draws on hard-won experience to explain every facet of information security, from the basics to advanced cryptography and authentication; secure Web and email services; and emerging security standards. Highlights of the book's extensive new coverage include Advanced Encryption Standard (AES), IPsec, SSL, PKI Standards, and Web security.

CHARLIE KAUFMAN is a Distinguished Engineer at IBM, where he is Chief Security Architect for Lotus Notes and Domino. Previously, he was the Network Security Architect at Digital Equipment Corporation. He chaired the IETF's Web Transaction Security working group and currently serves on the IAB, the IETF's architecture board.

RADIA PERLMAN, Distinguished Engineer at Sun Microsystems, is known worldwide for her contributions to bridging (spanning tree algorithm) and routing (link state routing) as well as security (sabotage-proof networks). Perlman is the author of Interconnections: Bridges, Routers, Switches, and Internetworking Protocols, and she is one of the 25 people whose work has most influenced the networking industry, according to Data Communications magazine.

MIKE SPECINER is a Senior Consulting Engineer at ThinkEngine Networks and is a recognized expert in mathematical algorithms and operating systems.

The classic guide to network security—now fully updated!"Bob and Alice are back!"

Widely regarded as the most comprehensive yet comprehensible guide to network security, the first edition of Network Security received critical acclaim for its lucid and witty explanations of the inner workings of network security protocols. In the second edition, this most distinguished of author teams draws on hard-won experience to explain the latest developments in this field that has become so critical to our global network-dependent society.

The authors go far beyond documenting standards and technology: They contrast competing schemes, explain strengths and weaknesses, and identify the crucial errors most likely to compromise secure systems. Network Security will appeal to a wide range of professionals, from those who design or evaluate security systems to system administrators and programmers who want a better understanding of this important field. It can also be used as a textbook at the graduate or advanced undergraduate level.

Descrizione libro Prentice Hall. soft cover. Condizione: New. International Edition. No supplemental materials. International Editions may have a different cover or ISBN but generally have the exact same content as the US edition, just at a more affordable price. In some cases, end of chapter questions may vary slightly from the US edition. International Editions are typically printed in grayscale, and likely will not have any color throughout the book. New. Books ship from multiple locations depending on availability. All orders are shipped with tracking information. We take pride in our customer service. Please contact us if you have any questions regarding this listing. Codice articolo 10304