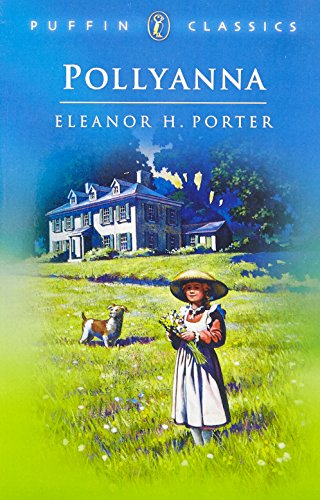 As soon as Pollyanna arrives in Beldingsville to live with her strict and dutiful maiden aunt, she begins to brighten up everybody's life. The 'glad game' she plays, of finding a silver lining in every cloud, transforms the sick, the lonely and the plain miserable - until one day something so terrible happens that even Pollyanna doesn't know how ot feel glad about it.

Eleanor Emily Hodgman Porter was an American novelist. She was born in 1868 in Littleton, New Hampshire. She was trained as a singer, attending the New England Conservatory for several years. In 1892 she married John Lyman Porter and moved to Massachusetts, after which she began writing and publishing her short stories and, later, novels. She died in Cambridge, Massachusetts in 1920, and was buried at Mount Auburn Cemetery.

Miss Polly Harrington entered her kitchen a little hurriedly this June morning. Miss Polly did not usually make hurried movements; she specially prided herself on her repose of manner. But today she was hurrying – actually hurrying.
Nancy, washing dishes at the sink, looked up in surprise. Nancy had been working in Miss Polly’s kitchen only two months, but already she new that her mistress did not usually hurry.
‘Nancy!’
‘Yes, ma’am,’ Nancy answered cheerfully, but she still continued wiping the pitcher in her hand.
‘Nancy’ – Miss Polly’s voice was very stern now – ‘when I’m talking to you I wish you to stop your work and listen to what I have to say.’
Nancy flushed miserably. She set the pitcher down at once, with the cloth still about it, thereby nearly tipping it over – which did not add to her composure.
‘Yes ma’am; I will ma’am,’ she stammered, righting the pitcher, and turning hastily. ‘I was only keepin’ on with my work ‘cause you specially told me this mornin’ ter hurry with my dishes, ye know.’
Her mistress frowned.
‘That will do, Nancy. I did not ask for your explanations. I asked for your attention.’
‘Yes ma’am.’ Nancy stifled a sigh. She was wondering if ever in any way she could please this woman. Nancy had never ‘worked out’ before; but a sick mother, suddenly widowed and left with three younger children besides Nancy herself, had forced the girl into doing something towards their support, and she had been so pleased when she found a place in the kitchen of the great house on the hill – Nancy had come from ‘The Corners’, six miles away, and she knew Miss Polly Harrington only as the mistress of the old Harrington homestead, and one of the wealthiest residents in the town. That was two months before. She knew Miss Polly now as a stern, severe-faced woman who frowned if a knife clattered to the floor, or if a door banged – but who never thought to smile even when knives and doors were still.
‘When you’ve finished your morning work, Nancy,’ Miss Polly was saying now, ‘you may clear the little room at the head of the stairs in the attic, and make up the cot bed. Sweep the room and clean it, of course, after you clear out the trunks and boxes.’
‘Yes ma’am. And where shall I put the things, please, that I take out?’
‘In the front attic.’ Miss Polly hesitated, then went on: ‘I suppose I may as well tell you now, Nancy. My niece, Miss Pollyanna Whittier is coming to live with me. She is eleven years old, and will sleep in that room.’
‘A little girl – coming here, Miss Harrington? Oh, won’t that be nice!’ cried Nancy, thinking of the sunshine her own little sisters made in the home at ‘The Corners’.
‘Nice? Well, that isn’t exactly the word I should use,’ rejoined Miss Polly stiffly. ‘However, I intend to make the best of it, of course. I am a good woman, I hope; and I know my duty.’
Nancy coloured hotly.
‘Of course, ma’am; it was only that I thought a little girl here might – might brighten things up – for you,’ she faltered.
‘Thank you,’ rejoined the lady dryly. ‘I can’t say, however, that I see any immediate need for that.’
‘But, of course, you – you’d want her, your sister’s child,’ ventured Nancy, vaguely feeling that somehow she must prepare a welcome for this lonely little stranger.
Miss Polly lifted her chin haughtily.
‘Well, really, Nancy, just because I happened to have a sister who was silly enough to marry and bring unnecessary children into a world that was already quite full enough, I can’t see how I should particularly want to have the care of them myself. However, as I said before, I hope I know my duty. See that you clean the corners, Nancy,’ she finished sharply as she left the room.
‘Yes ma’am,’ sighed Nancy, picking up the half dried pitcher – now so cold it must be rinsed again.
In her own room Miss Polly took out once more the letter which she had received two days before from the far-away Western town, and which had been so unpleasant a surprise to her. The letter was addressed to ‘Miss Polly Harrington, Beldingsville, Vermont’; and it read as follows:

Dear Madam,
I regret to inform you that the Rev. John Whittier died two days ago, leaving one child, a girl eleven years old. He left practically nothing else save a few books; for, as you doubtless know, he was the pastor of this small mission church, and had a very meagre salary.
I believe he was your deceased sister’s husband, but he gave me to understand that the families were not on the best terms. He thought, however, that for your sister’s sake you might wish to take the child and bring her up among her own people in the East. Hence I am writing to you.
The little girl will be all ready to start by the time you get this letter; and if you can take her, we would appreciate it very much if you would write that she might come at once, as there is a man and his wife here who are going East very soon, and they would take her with them to Boston, and put her on the Beldingsville train. Of course you would be notified what day and train to expect Pollyanna on.
Hoping to hear favourably from you soon, I remain,

With a frown Miss Polly folded the letter and tucked it into its envelope. She had answered it the day before, and she had said she would take the child, of course. She hoped she knew her duty well enough for that! – disagreeable as the task would be.

As she sat now, with the letter in her hands, her thoughts went back to her sister Jennie, who had been this child’s mother, and to the time when Jennie, as a girl of twenty, had insisted upon marrying the young minister, in spite of her family’s remonstrances. There had been a man of wealth who had wanted her – and the family had much preferred him to the minister but Jennie had not. The man of wealth had more years, as well as more money, to his credit, while the minister had only a young head full of youth’s ideals and enthusiasm, and a heart full of love. Jennie had preferred these – quite naturally, perhaps; so she had married the minister, and had gone south with him as a home missionary’s wife.
The break had come then. Miss Polly remembered it well, though she had been but a girl of fifteen, the youngest, at the time. The family had had little more to do with the missionary’s wife. To be sure, Jennie herself had written, for a time, and had named her last baby Pollyanna, for her two sisters Polly and Anna – the other babies had all died. This had been the last time that Jennie had written; and in a few years there had come the news of her death, told in a short but heart-broken note from the minister himself, dated at a little town in the West.
Meanwhile, time had not stood still for the occupants of the great house on the hill. Miss Polly, looking out at the far-reaching valley below, thought of the changes those twenty-five years had brought to her.
She was forty now, and quite alone in the world. Father, mother, sisters – all were dead. For years now, she had been the sole mistress of the house and of the thousands left her by her father. There were people who had openly pitied her lonely life, and who had urged her to have some friend or companion to live with her; but she had not welcomed either their sympathy or their advice. She was not lonely, she said. She liked being by herself. She preferred quiet. But now...
Miss Polly rose with frowning face and closely shut lips. She was glad, of course, that she was a good woman, and that she not only knew her duty, but had sufficient strength of character to perform it. But - Pollyanna! what a ridiculous name!