Articoli correlati a The Trial of the Cannibal Dog: Captain Cook in the...

Salmond, Anne The Trial of the Cannibal Dog: Captain Cook in the South Seas

The Trial of the Cannibal Dog: Captain Cook in the South Seas 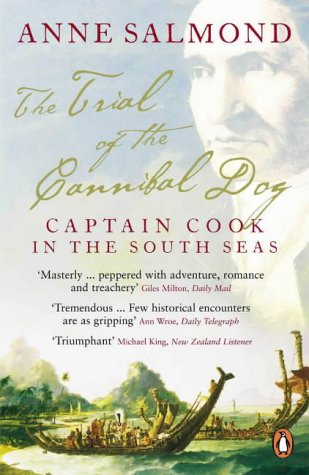 The Trial of the Cannibal Dog is a spectacular recreation of three of the greatest and most startling of all human journeys.

The Pacific voyages of James Cook explored the ice-bound fringes of the Arctic and Antarctic, sailed across perilous tropical seas, survived hurricanes and volcanic eruptions, discovered unknown lands and peoples and made their Captain an icon of imperial history.

Yet, as Anne Salmond shows, the story of these epic South Sea journeys is far more than one of conquest and control. She has devoted a lifetime to the study of relations between Europeans and Polynesians, and this startling, rich, stylish book is the result. In Salmond's account, Cook's great voyages regain their dreamlike quality as they encounter the last major human communities, untouched by wider worlds. Far from being little wooden islands of Englishness in a Polynesian sea, his ships and the men in them are as much changed by what happens as the islanders they meet. We see them alarmed and entranced by the islanders' open sexuality, shocked by human sacrifice and cannibalism, but also forging relationships with Pacific Island friends and lovers, acquiring tattoos and learning to speak Polynesian languages, with Cook himself granted the status of high chief in many areas before his violent downfall.

Filled with astonishing descriptions, drawing on all the surviving accounts of New Zealand, Tahiti, Easter Island, Hawaii, Tonga, the Society Islands and the New Hebrides, The Trial of the Cannibal Dog re-imagines the two worlds that explosively collided in the eighteenth century and the lasting impact of that collision.

'A masterly account of Cook's three Pacific voyages... with a significant reassessment of the circumstances of his death' Glyn Williams

Anne Salmond is Professor of Maori Studies and Pro-Vice-Chancellor at the University of Auckland.

1. THE TRIAL OF THE CANNIBAL DOG :

2. THE TRIAL OF THE CANNIBAL DOG :

3. The Trial of the Cannibal Dog : Captain Cook in the South Seas