Articoli correlati a The Penguin Guide to Jazz Recordings

The Penguin Guide to Jazz Recordings 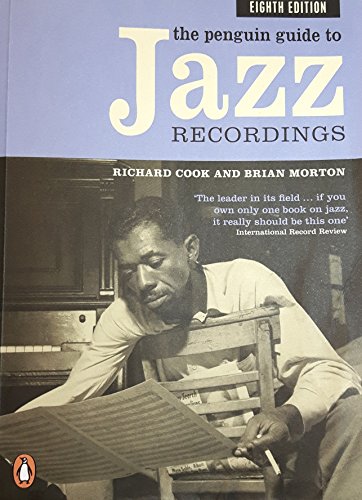 The Penguin Guide to Jazz on CD is now firmly established as the world's leading guide to recorded jazz, a mine of fascinating information and a source of insightful - often wittily trenchant - criticism. For this completely revised eighth edition, Richard Cook and Brian Morton have reassessed each artists's entry and updated the text to incorporate thousands of additional CDs. The result is an endlessly browsable companion that will prove required reading for aficionados and jazz novices alike.

The leader in its field... if you own only one book on jazz, it really should be this one. (International Record Review)

Richard Cook (1957-2007) has been writing about music since the 1970s: he was a contributor to the NME, Wire (he was their editor for seven years) and the Sunday Times. He was also a record industry executive and a regular broadcaster. Brian Morton been an academic and journalist, and more recently a freelance writer and broadcaster. He presents BBC Radio 3's jazz magazine, Impressions, as well as the posher In Tune. Since May 1996, he has been senior producer of Radio Scotland's arts strand, The Usual Suspects. He fulfils one cynic's definition of a gentleman: owning several saxophones, but now seldom playing them.

Richard Cook was formerly editor of The Wire and now edits Jazz Review. He also contributes to many other publications, including The New Statesman. He lives in London.

Brian Morton is a freelance writer and broadcaster, who for many years presented Radio 3's jazz magazine Impressions and In Tune. He has also broadcasted extensively on BBC Radio Scotland.

4. THE PENGUIN GUIDE TO JAZZ RECORD