Articoli correlati a The Second World: Empires and Influence in the New...

Khanna, Parag The Second World: Empires and Influence in the New Global Order

The Second World: Empires and Influence in the New Global Order 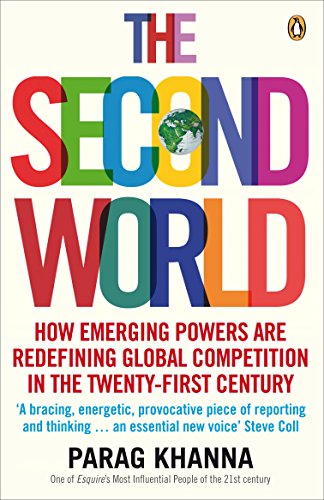 At the end of the Cold War, we found ourselves living in a world with one superpower, the United States. Now, at the start of the twenty-first century, Parag Khanna argues powerfully that the moment of American supremacy is over, brought about by the increasing influence of what he terms the Second World: Eastern Europe, Central Asia, South America, the Middle East and East Asia. Travelling from Azerbaijan to Venezuela, China's hinterlands to Gaddafi's Libya, Parag Khanna explores these countries and their global significance. For as the three superpowers - the US, the EU and China - compete for influence in the Second World, citizens of these countries can already feel the these imperial forces exerting their influence and affecting the global balance of power. In a bold and provocative style, The Second World makes clear what's at stake, for whoever dominates the Second World will lead the twenty-first century - or become a part of the Second World itself.

Parag Khanna travelled through more than fifty countries to research The Second World. Always interested in global trends, his goal has been to integrate trends in power, conflict, environment, culture and strategy into a single framework, and to explain highly complex societies on their own terms - not only in terms of their interactions with or utility to the West. Previously a Fellow at the Brookings Insititution and manager of the Global Governance Initiative of the World Economic Forum, he is now a Fellow of the New America Foundation and is completing his Ph.D. in International Relations at the London School of Economics.

A New York Times Idea of the Year

'Takes us to a whole series of important places we might be disinclined to visit for ourselves and gives us glimpses of life on that messy borderland between the second world and the first ... a great feat of reportage' Niall Ferguson, Financial Times

'Amid the recent surge of dashing political-military-international-affairs intellectuals, Khanna stands out as young, original, and roughed up.' Esquire

At the end of the twentieth century, America dominated the world.No longer. We are on the verge of a new world order, and for anyone who wants to know who's holding the balance of power, Parag Khanna's bracing account of the increasing influence of the 'Second World' is vital reading. Reporting first-hand from more than fifty countries - in Eastern Europe, Central and East Asia, the Middle East and South America - Khanna travels through the heart of global power in the coming century, and takes you with him.

Because America isn't the only choice anymore. These countries - from Libya to Venezuela to Azerbaijan - now have their pick of three superpowers: America, China and the EU. Who they choose to ally themselves with will define the coming years.

'This is the sort of reporting newspapers can no longer afford to send correspondents to do ... compelling and exciting' Malcolm Moore, Daily Telegraph

1. The Second World: Empires and Influence in the New Global Order: How Emerging Powers Are Redefining Global Competition in the Twenty-first Century

2. The Second World: Empires and Influence in the New Global Order