Articoli correlati a Where Angels Fear to Tread [Lingua Inglese] 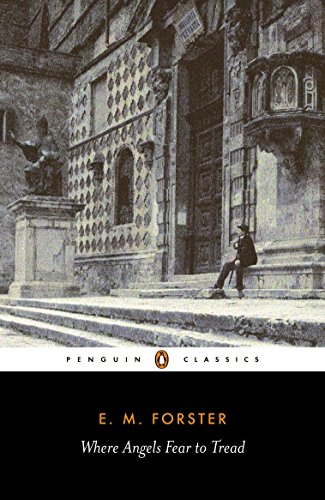 E.M. Forster's Where Angels Fear to Tread is amongst the greatest twentieth-century literary explorations of vice, virtue and the nature of prejudice, edited with notes by Oliver Stallybrass and an introduction by Ruth Padel in Penguin Classics.

On travelling to Italy with her friend Caroline Abbott, the impulsive English widow Lilia Herriton outrages her dead husband's family by meeting and quickly becoming engaged to Gino, a dashing but deeply unsuitable Italian man twelve years her junior. Infuriated, her ex-brother-in-law Philip sets off from England to her new home in the Tuscan town of Monteriano - but, finding himself unable to persuade Lilia to leave her handsome, uncouth new lover, returns to England without her. When Lilia's marriage leads to sudden tragedy, however, Philip and Caroline feel compelled to return once more to Italy, where they are forced to examine their own lives.

This edition reproduces the Abinger text, and also includes further reading, notes, a chronology, an introduction by Ruth Padel discussing division and culture clash in the novel and an appendix detailing an exchange about the novel between Forster and the poet R.C. Trevelyan.

E. M. Forster (1879-1970) was a noted English author and critic and a member of the Bloomsbury group. His first novel, Where Angels Fear To Tread appeared in 1905. The Longest Journey appeared in 1907, followed by A Room With A View (1908), based partly on the material from extended holidays in Italy with his mother. Howards End (1910) was a story that centered on an English country house and dealt with the clash between two families, one interested in art and literature, the other only in business. Maurice was revised several times during his life, and finally published posthumously in 1971.

If you enjoyed Where Angels Fear to Tread, you might enjoy Forster's A Room With a View, also available in Penguin Classics.

Edward Morgan Forster was born in London in 1879. He wrote six novels, four of which appeared before the First World War: Where Angels Fear to Tread (1905), The Longest Journey (1907), A Room with a View (1908), and Howard’s End (1910). An interval of fourteen years elapsed before he published A Passage to India. Maurice, his novel on a homosexual theme, finished in 1914, was published posthumously in 1971. He died in June 1970.

Ruth Padel is a British poet, a Fellow of the Royal Society of Literature. She has won the UK National Poetry Competition and published six collections of poetry. Voodoo Shop (2002) was shortlisted for the T. S. Eliot and Whitbread Prizes. The Soho Leopard (2004) is a Poetry Book Society Choice. She wrote the popular "Sunday Poem" column for the Independent on Sunday for three years.

1. Where Angels Fear to Tread (Paperback)

Descrizione libro 2008. Paperback. Condizione: New. Paperback. When attractive, impulsive English widow Lidia takes a holiday in Italy, she causes a scandal by marrying Gino, a dashing and highly unsuitable Italian twelve years her junior. Her prim, s.Shipping may be from multiple locations in the US or from the UK, depending on stock availability. 147 pages. 0.136. Codice articolo 9780141441450

4. Where Angels Fear to Tread (Paperback)

Descrizione libro 2008. Paperback. Condizione: New. Paperback. When attractive, impulsive English widow Lidia takes a holiday in Italy, she causes a scandal by marrying Gino, a dashing and highly unsuitable Italian twelve years her junior.Shipping may be from our Sydney, NSW warehouse or from our UK or US warehouse, depending on stock availability. 147 pages. 0.136. Codice articolo 9780141441450

5. Where Angels Fear to Tread