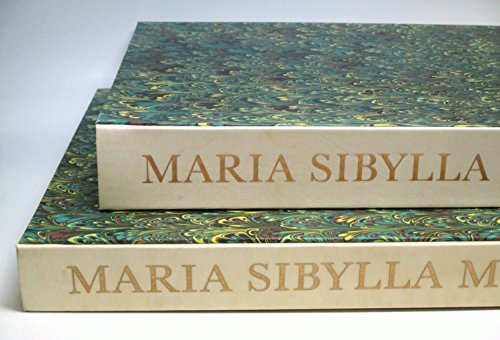 Descrizione libro Harcourt Brace Jovanovich: Helen and Kurt Wolff, New York and London, 1974. Condizione: Very Good. 319, 50 col plates, 17 col folding plates. 475x370mm. HB. Copy no 312/1750. 2 vols (Plates/Commentary), folio, vellum spines, marbled boards. Vol. 1 consists 50 loose colour facsimile plates of originals in the Library of the Academy of Sciences in St Petersburg (former Leningrad), each with numbered text wrapper boxed in a foldover case with marbled boards, slightly rubbed, one corner bumped, vellum spine, and slightly spotted cloth edges. Vol. 2 is bound in qtr vellum, small bruise to spine, marbled boards, top edge slightly spotted, small spot to fore-edge. With 17 folding plates with 146 watercolours by Merian. Very good set without the slipcase. Multi-lingual text (German/English/French/Russian/Latin). Limited edition of 1,750 numbered copies.Maria Sibylla Merian, also known as Anna Maria Sibylla (1647-1717) was German-born naturalist, artist and explorer. A pioneering entomologist, she was one of the first who studied the metamorphoses of insects, preceded by the Dutch naturalists Johannes Goedaert (1620-1668) and Jan Swammerdam (1637-1680), and the first to observe the metamorphosis of tropical insects. In 1699 she undertook the arduous journey to Suriname with her daughter, Dorothea, to study insects in their natural habitat. The resulting publication, 'Metamorphosis Insectorum Surinamensium' (The Metamorphosis of the Insects of Suriname) made her world-famous. Through her accurate and realist illustrations of insects and their food plants, she was the first to document these life stages for the public. Merian is now recognised as one of the best insect (and flower) scientific illustrators of her day and indeed, of all time.The year of Merian s death, her paintings were purchased for Peter I, tsar of Russia. Her daughter, Dorothea Maria subsequently was summoned to St. Petersburg, where she worked as a scientific illustrator for the tsar and became the first woman to be employed by the Russian Academy of Sciences. [9780151498376]. Codice articolo S30049