Articoli correlati a New Spirits: Americans in the "Gilded Age"... 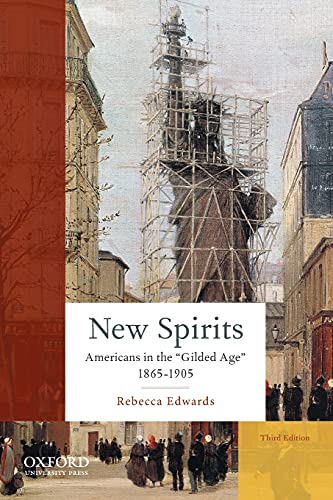 New Spirits: Americans in the "Gilded Age," 1865-1905, Third Edition, provides a fascinating look at one of the most crucial chapters in U.S. history. Rejecting the stereotype of a "Gilded Age" dominated by "robber barons," author Rebecca Edwards invites us to look more closely at the period when the United States became a modern industrial nation and asserted its place as a leader on the world stage.

In a concise, engaging narrative, Edwards recounts the contradictions of the era, including stories of tragedy and injustice alongside tales of humor, endurance, and triumph. She offers a balanced perspective that considers many viewpoints, including those of native-born whites, Native Americans, African Americans, and an array of Asian, Mexican, and European immigrants.

Rebecca Edwards is Professor of History on the Eloise Ellery Chair at Vassar College. She is the author of Angels in the Machinery: Gender in American Party Politics from the Civil War to the Progressive Era (OUP, 1997) and coauthor, with James A. Henretta and Robert O. Self, of America's History, Seventh Edition (2011).

Descrizione libro Oxford University Press, 2015. Paperback. Condizione: Good. Item may show signs of shelf wear. Pages may include limited notes and highlighting. May include supplemental or companion materials if applicable. Access codes may or may not work. Connecting readers since 1972. Customer service is our top priority. Codice articolo mon0002202999

Descrizione libro Oxford University Press, 2015. Condizione: Good. A+ Customer service! Satisfaction Guaranteed! Book is in Used-Good condition. Pages and cover are clean and intact. Used items may not include supplementary materials such as CDs or access codes. May show signs of minor shelf wear and contain limited notes and highlighting. Codice articolo 0190217170-2-4

Descrizione libro Oxford University Press, 2015. Paperback. Condizione: GOOD. Has little wear to the cover and pages. Contains some markings such as highlighting and writing. Supplemental materials are not guaranteed with any used book purchases. Codice articolo 0190217170_abe_gd

Descrizione libro Oxford University Press, 2015. Paperback. Condizione: VERY GOOD. Pages are intact and are not marred by notes or highlighting, but may contain a neat previous owner name. The spine remains undamaged. Supplemental materials are not guaranteed with any used book purchases. Codice articolo 0190217170_abe_vg