Articoli correlati a The Oxford Book of Legal Anecdotes

The Oxford Book of Legal Anecdotes 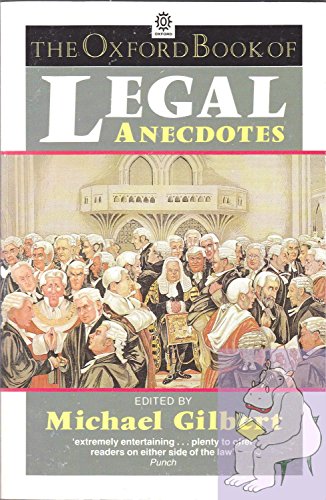 The law has captured the public's attention and imagination for centuries, with its servants demonstrating time and again their fallibility. A former lawyer and celebrated crime writer, Michael Gilbert has compiled a vastly entertaining collection of over three hundred fifty anecdotes about legal goings-on over the past two hundred fifty years, and about the individuals who have won distinction in the legal profession. Drawn from the reminiscences of lawyers, criminals, witnesses, and clerks, these irresistibly readable stories present the foibles as well as the authority of judges and other legal practitioners.
We find many celebrated legal battles retold here, including Edward Carson's cross-examination of Oscar Wilde and Clarence Darrow's defense of J.T. Scopes for teaching the theory of evolution. We also discover countless less-familiar treasures such as the story of the letter received by Judge Benjamin Cardozo which said: "I read in the newspapers that you are a liberal judge. Will you send me ten dollars as I'm really very hard up."
Gilbert has arranged the entries alphabetically by the name of their principal subject. He also includes headnotes which set the context and describe each subject's occupation (i.e. "judge", "attorney general") and a useful note which explains the differences between the British, European, and American legal systems.

\
About the Author:
Michael Gilbert is the author of many books, including Empty House, Death in Captivity, and Black Seraphim.