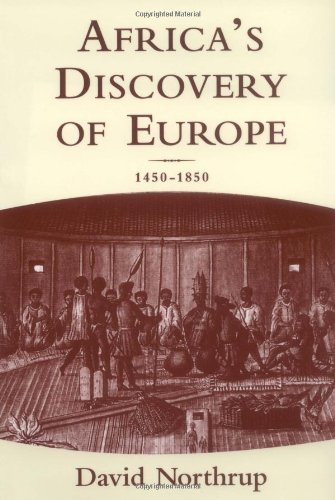 Interest in African history has been growing rapidly in recent years. The encounters between Europeans and Sub-Saharan Africans--which first began to intensify during the 15th century--are currently a popular area of study. Up to now, however, only the Europeans viewpoint of these encounters has been explored. David Northrup's Africa's Discovery of Europe remedies this imbalance. Northrup explores the African side of this cultural collision as it unfolded in Africa, Europe, and the Atlantic world between 1450 and 1850. The text is organized thematically, with chapters devoted to first impressions, religion and politics, commerce and culture, imported goods and technology, the Middle Passage, and Africans in Europe. It examines Africans' intellectual, commercial, cultural, and sexual relations with Europeans and describes how the patterns of behavior that emerged from these encounters shaped pre-colonial Africa. The book concludes with an examination of the roles of race, class, and culture in early modern times, and suggests which themes in Africa's continuing discovery of Europe after 1850 were similar to earlier patterns, and why some themes were different. Africa's Discovery of Europe is designed to be used in undergraduate courses on Africa and will also have strong appeal to the general reader.