Articoli correlati a The Roman Fort 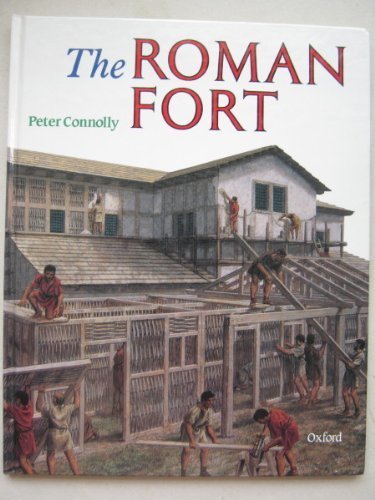 "The dull blast of a horn signalled the end of the fourth watch. The smoldering embers of a thousand campfires, fanned by the cool morning breeze, glowed in the half-light. The night sentries relaxed at their posts waiting to be relieved. Soon soldiers were emerging from their tents yawning and shivering as they kicked over the embers and added wood to cook their breakfast."
Thus begins a typical day in the life of a Roman soldier. But the tedious chores of his everyday life are clear reflections of what the Roman Empire was experiencing and how all of its citizens lived. Peter Connolly utilizes the latest historical evidence from excavations of major fortifications to create a detailed and fascinating portrait of typical Roman forts and of the soldiers who maintained them along Hadrian's Wall and other Roman boundaries for more than 350 years.
He begins with the actual construction of roads and forts, using cross-sections and cutaways that show the actual building techniques the Romans used. Next he turns to the soldiers and the forts they maintained. We look into their barracks to see how they slept, cooked their food, what they did for relaxation, how the plumbing worked, and how they prepared for battle. Finally, Connolly looks past the forts to the villages that sprang up around them as merchants, wives, children, and other campfollowers settled and built the towns that, in some cases, still flourish today.
The meticulous and well-researched drawings and maps for which Connolly is known will attract young readers and keep them enthralled. And his skills as an archeologist and storyteller enable him to present the latest discoveries, conclusions, and speculations in a highly entertaining and easy-to-understand text. The history of early Rome from the viewpoint of the everyday soldier is made immediate and familiar in this newest volume in Oxford's Rebuilding the Past series. It will make a fine addition to school, classroom, or home library.

About the Author:
Peter Connolly is an acclaimed archaeologist, artist and writer. He is the major contributor to Oxford's Rebuilding the Past series.

1. The Roman Fort (Rebuilding the Past) Connolly, Peter

2. The Roman Fort (Rebuilding the Past) Connolly, Peter

3. The Roman Fort (Rebuilding the Past)

4. The Roman Fort (Rebuilding the Past)