Articoli correlati a Government by the People: 2012 Election Edition

Government by the People: 2012 Election Edition 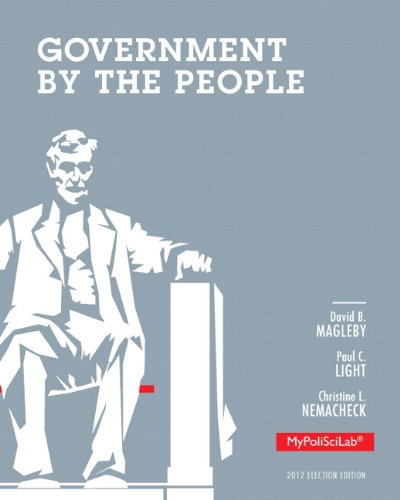 Explore American politics through the Constitution

Government by the People, 2012 Election Edition continues a tradition of excellence by offering the most classroom-tested introduction to the foundational principles, processes, and institutions of American government. Emphasizing the accomplishments of a government of the people, by the people, andfor the people, this text highlights the central role people play in a constitutional democracy.Government by the People inspires students to see how similarities and differences in political beliefs continue to shape government today.

This text features full integration with the New MyPoliSciLab. MyPoliSciLab includes a wide array of resources to encourage students to look at American politics like a political scientist and analyze current political issues. Political Explorer lets students play the role of a political scientist by investigating issues through interactive data. Core Concept videos discuss the big ideas in each chapter and apply them to key political issues. Simulations allow students to experience how political leaders make decisions.

A better teaching and learning experience

This program provides a better teaching and learning experience–for you and your students. Here’s how:

“It is important to have a mission, goals, and a well-defined endgame for any project, policy, or effort. Government by the People does that by indicating to the reader where we are going, how we're going to get there, and what we will learn along the way.”—Lawson Veasey, Jacksonville State University

“A well-balanced approach to American culture and government. Government by the People continues to improve with each edition.”–Kevin Sims, Cedarville University

“A comprehensive and great text on American politics that is easily accessible to undergraduate students.”–Linda Trautman, Ohio University-Lancaster

David B. Magleby is a Distinguished Professor of Political Science and Senior Research Fellow at the Center for the Study of Elections and Democracy at Brigham Young University (BYU). He is nationally recognized for his expertise on direct democracy, voting behavior, and campaign finance. Dave is also the recipient of many teaching awards, including the 1990 Utah Professor of the Year Award, the 2001 Rowman & Littlefield Award for Innovative Teaching in Political Science, and several department and university awards.

Paul C. Light is the Paulette Goddard Professor of Public Service at New York University’s Wagner School of Public Service. He has worked on Capitol Hill as a senior committee staffer in the U.S. Senate and as an American Political Science Association Congressional Fellow in the U.S. House of Representatives. Paul is the founding director of the Brookings Institution’s Center for Public Service and continues his research on how to invite Americans to serve their communities through public service.

Christine L. Nemacheck is the Alumni Memorial Distinguished Associate Professor of Government at The College of William & Mary. Her research focuses on judicial selection and the role of the courts in a separation-of-powers system. Chris has received a number of awards for her teaching and research activity, including the Alumni Fellowship Award for excellence in teaching at The College of William & Mary.

1. Government By the People, 2012 Election Edition