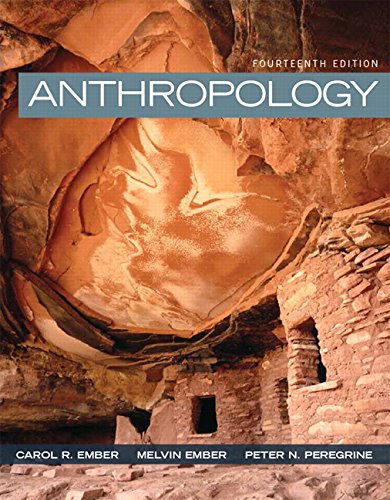 Anthropology, provides students with a comprehensive and scientific introduction to the holistic four fields of anthropology and the important role of applied anthropology. Readers will understand humans in all their variety, and why such variety exists. It also show students how anthropological skill sets can be applied beyond academia. The fourteenth edition places an increased emphasis on new explanations and the necessity to evaluate these new explanations logically as well as on the basis of the available evidence.

REVEL from Pearson is an immersive learning experience designed for the way today’s student read, think, and learn. REVEL modernizes familiar and respected course content with dynamic media interactives and assessments, and empowers educators to increase engagement in the course, better connecting with students. The result is increased student engagement and improved learning.

This program will provide a better teaching and learning experience- for you and your students. It:

Carol R. Ember started at Antioch College as a chemistry major. She began taking social science courses because some were required, but she soon found herself intrigued. There were lots of questions without answers, and she became excited about the possibility of a research career in social science. She spent a year in graduate school at Cornell studying sociology before continuing on to Harvard, where she studied anthropology primarily with John and Beatrice Whiting.

For her Ph.D. dissertation she worked among the Luo of Kenya. While there she noticed that many boys were assigned “girls’ work,” such as babysitting and household chores, because their mothers (who did most of the agriculture) did not have enough girls to help out. She decided to study the possible effects of task assignment on the social behavior of boys. Using systematic behavior observations, she compared girls, boys who did a great deal of girls’ work, and boys who did little such work. She found that boys assigned girls’ work were intermediate in many social behaviors, compared with the other boys and girls. Later, she did cross-cultural research on variation in marriage, family, descent groups, and war and peace, mainly in collaboration with Melvin Ember, whom she married in 1970. All of these cross-cultural studies tested theories on data for worldwide samples of societies.

From 1970 to 1996, she taught at Hunter College of the City University of New York. She has served as president of the Society of Cross-Cultural Research and was one of the directors of the Summer Institutes in Comparative Anthropological Research, which were funded by the National Science Foundation. From 1996 until 2009 she served as executive director of the Human Relations Area Files, Inc. (HRAF), a nonprofit research agency at Yale University. She was appointed President of HRAF in 2010. She is also currently Past-President of the Society for Anthropological Sciences.

After graduating from Columbia College, Melvin Ember went to Yale University for his Ph.D. His mentor at Yale was George Peter Murdock, an anthropologist who was instrumental in promoting cross-cultural research and building a full-text database on the cultures of the world to facilitate cross-cultural hypothesis testing. This database came to be known as the Human Relations Area Files (HRAF) because it was originally sponsored by the Institute of Human Relations at Yale. Growing in annual installments and now distributed in electronic format, the HRAF database currently covers more than 410 cultures, past and present, all over the world.

Melvin Ember did fieldwork for his dissertation in American Samoa, where he conducted a comparison of three villages to study the effects of commercialization on political life. In addition, he did research on descent groups and how they changed with the increase of buying and selling. His cross-cultural studies focused originally on variation in marital residence and descent groups. He has also done cross-cultural research on the relationship between economic and political development, the origin and extension of the incest taboo, the causes of polygyny, and how archaeological correlates of social customs can help us draw inferences about the past.

After four years of research at the National Institute of Mental Health, he taught at Antioch College and then Hunter College of the City University of New York. He has served as president of the Society for Cross-Cultural Research. From 1987 until his death in 2009, he was president of HRAF.

Peter N. Peregrine came to anthropology after completing an undergraduate degree in English. He found anthropology’s social scientific approach to understanding humans more appealing than the humanistic approach he had learned as an English major. He undertook an ethnohistorical study of the relationship between Jesuit missionaries and Native American peoples for his master’s degree and realized that he needed to study archaeology to understand the cultural interactions experienced by Native Americans prior to contact with the Jesuits.

While working on his PhD at Purdue University, Peter Peregrine did research on the prehistoric Mississippian cultures of the eastern United States. He found that interactions between groups were common and had been shaping Native American cultures for centuries. Native Americans approached contact with the Jesuits simply as another in a long string of intercultural exchanges. He also found that relatively little research had been done on Native American interactions and decided that comparative research was a good place to begin examining the topic. In 1990, he participated in the Summer Institute in Comparative Anthropological Research, where he met Carol R. Ember and Melvin Ember/

Peter Peregrine is professor of anthropology at Lawrence University in Appleton, Wisconsin and external professor at the Santa Fe Institute in Santa Fe, New Mexico. He also serves as research associate for the Human Relations Area Files. He continues to do archaeological research, and to teach anthropology and archaeology to undergraduate students.

Descrizione libro 2014. Paperback. Condizione: New. 14th. Paperback. Explains how and why human cultures vary so greatly across space and time Anthropology, provides students with a comprehensive and scientific introduction to the holistic four fields of an.Shipping may be from multiple locations in the US or from the UK, depending on stock availability. 688 pages. 1.384. Codice articolo 9780205957187

Descrizione libro 2014. Paperback. Condizione: New. 14th. Paperback. Explains how and why human cultures vary so greatly across space and time Anthropology, provides students with a comprehensive and scientific introduction to the holistic four.Shipping may be from our Sydney, NSW warehouse or from our UK or US warehouse, depending on stock availability. 688 pages. 1.384. Codice articolo 9780205957187