Articoli correlati a The RSC Shakespeare: The Complete Works (Collector's... 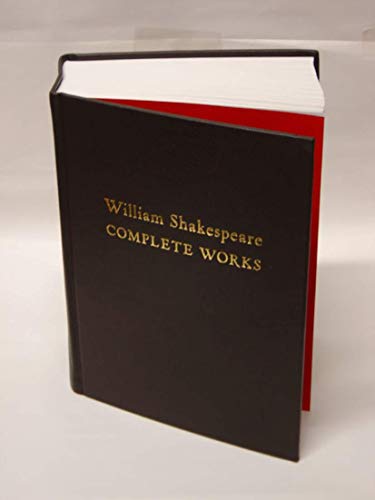 This limited print-run Collector's edition of the Complete Works of Shakespeare was developed in partnership with The Royal Shakespeare Company and is edited by two of the world's leading Shakespeare scholars. Richly illustrated and bound in soft brown leather with gold lettering and ribbon markers, it is delivered tissue wrapped in a gift box.

'Excellent, succinct notes and introductions to each play.' - John Carey, The Sunday Times

'A splendid edition. The general introduction is among the best 50-page guides to Shakespeare you could hope to find, while the short essays prefixed to each play are like the best kind of programme notes - informative, thought-provoking and humane. Marginal notes help readers imagine what's happening onstage ... The RSC's edition tells you all you need to know about the life, but also, vitally, allows you to lose yourself in the wonder of the works.' - Dr Colin Burrow, All Souls College, Oxford University, writing in The Evening Standard

'The paper quality and page design are excellent, and the illustrations in the introductory materials are lavish and well reproduced ...a virtual comet-tail of supplementary materials are to be found at www.rscshakespeare.co.uk - the RSC is certainly the first edition of Shakespeare to provide a link to it's editor's blog.... Bate's general introduction to Shakespeare's life, stage and reputation is superb, and the short introductions to individual works, in particular, are among the best of their kind available...they manage to speak about what really matters about the plays to readers who wish, whether they are already familiar with them or not, to come to them freshly. ' - Michael Dobson, writing in The London Review of Books

'A handsome volume, it is printed on fine paper and elegantly designed and printed, with clear typeface. This special edition is bound in black leather; it is a beautiful book that will be a pleasure to own.' - Good Book Guide

'One of the virtues of the approach Bate and Rasmussen have taken is to offer fresh ways of presenting the plays' - Peter Holland, TLS

JONATHAN BATE is Professor of Shakespeare and Renaissance Literature, University of Warwick, UK. He has held visiting posts at Harvard, Yale and UCLA and is a Fellow of the Royal Society of Literature, a Fellow of the British Academy, an Honorary Fellow of St Catharine's College, Cambridge, and a Governor and Board member of the Royal Shakespeare Company. A prominent critic, award-winning biographer and broadcaster, he is the author of several books on Shakespeare, including The Genius of Shakespeare (Picador), which was praised by Sir Peter Hall, founder of the RSC, as "the best modern book on Shakespeare." In June 2006 he was awarded a CBE by HM The Queen 'for services to Higher Education'.

ERIC RASMUSSEN is Professor of English at the University of Nevada, USA. He is co-editor of the Norton Anthology of English Renaissance Drama and has edited volumes in both the Arden Shakespeare and Oxford World's Classics series. He is the General Textual Editor of the Internet Shakespeare Editions project - one of the most visited Shakespeare websites in the world. For over nine years he has written the annual review of editions and textual studies for the Shakespeare Survey.