Articoli correlati a The RSC Shakespeare: The Complete Works

The RSC Shakespeare: The Complete Works 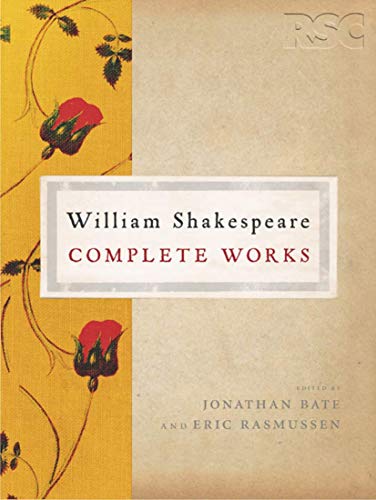 Developed in partnership with The Royal Shakespeare Company, this edition of the Complete Works of William Shakespeare combines exemplary textual scholarship with elegant writing and design. Sir Jonathan Bate and Professor Eric Rasmussen, two of today's most accomplished Shakespearean scholars, lead the expert editorial team. Bate's excellent general introduction and essays on each play draw on a unique wealth of experience and resources and will help the reader to understand Shakespeare's plays as they were originally intended - as living theatre to be enjoyed and performed. The text is based on the iconic 1623 First Folio: the first and original Complete Works lovingly assembled by Shakespeare's fellow actors and the version of Shakespeare's text preferred by many actors and directors today. The result is a fresh and definitive Complete Works for the twenty-first century that will inspire students, teachers and lovers of Shakespeare everywhere.

'One of the virtues of the approach Bate and Rasmussen have taken is to offer fresh ways of presenting the plays' - Peter Holland, TLS

'The paper quality and page design are excellent, and the illustrations in the introductory materials are lavish and well reproduced ...a virtual comet-tail of supplementary materials are to be found at www.rscshakespeare.co.uk - the RSC is certainly the first edition of Shakespeare to provide a link to it's editor's blog.... Bate's general introduction to Shakespeare's life, stage and reputation is superb, and the short introductions to individual works, in particular, are among the best of their kind available...they manage to speak about what really matters about the plays to readers who wish, whether they are already familiar with them or not, to come to them freshly.' - Michael Dobson, writing in The London Review of Books

'Everything about this edition is outstanding. To begin with, it's an attractively produced volume of the plays based on the 1623 First Folio, the landmark Shakespeare edition. Second, it's the work of two fine scholars who have harvested the labours of many experts to produce an edition that contains the fruit of the best contemporary research. Third, this exemplary text has greatly benefited from the active involvement of the RSC, a company whose recent work has exhibited an almost obsessional devotion to the meaning of Shakespeare's words in performance.' - Robert McCrum writing in The Observer

'A handsome volume...printed on fine paper and elegantly designed... This is a beautiful book that will be a pleasure to own.' - Good Book Guide

'Professor Jonathan Bate has written thought provoking essays for each play, discussing the source material and its influence on the play as well as pointing out the familiarities...for...contemporary audiences... The glossary includes much that has been ignored in the past, enlightening the new student...as well as adding to the vocabulary of those who have been enjoying his plays all their lives... This volume is an invaluable resource to anyone interested in or simply in love with Shakespeare.' - Speech and Drama

'... anyone who wants a good single volume edition of the plays... won't do better than this.' - Tribune

'Excellent, succinct notes and introductions to each play.'- John Carey, The Sunday Times

'A splendid edition. The general introduction is among the best 50-page guides to Shakespeare you could hope to find, while the short essays prefixed to each play are like the best kind of programme notes - informative, thought-provoking and humane. Marginal notes help readers imagine what's happening onstage ... The RSC's edition tells you all you need to know about the life, but also, vitally, allows you to lose yourself in the wonder of the works.' -
Dr Colin Burrow, All Souls College, Oxford University, writing in The Evening Standard

'The Complete Works has become the one-volume Shakespeare of choice.' - Plays International

'This marvellous Complete Works has the advantage of being both scholarly and eminently readable...If the motivation behind this new publication was to make Shakespeare more accessible, then one can only praise all the parties involved.  This is an edition set to last...and to treasure.' - Lancashire Evening Post

'... a timely reflection of the recent critical re-engagement with the significance of the Folio texts.' - English Studies

JONATHAN BATE is Professor of Shakespeare and Renaissance
Literature, University of Warwick, UK. He has held visiting posts at
Harvard, Yale and UCLA and is a Fellow of the Royal Society of Literature,
a Fellow of the British Academy, an Honorary Fellow of St Catharine's
College, Cambridge, and a Governor and Board member of the Royal
Shakespeare Company. A prominent critic, award-winning biographer and
broadcaster, he is the author of several books on Shakespeare, including
The Genius of Shakespeare (Picador), which was praised by Sir Peter Hall,
founder of the RSC, as "the best modern book on Shakespeare." In June 2006
he was awarded a CBE by HM The Queen 'for services to Higher Education'.

ERIC RASMUSSEN is Professor of English at the University of Nevada, USA. He
is co-editor of the Norton Anthology of English Renaissance Drama and has
edited volumes in both the Arden Shakespeare and Oxford World's Classics
series. He is the General Textual Editor of the Internet Shakespeare
Editions project - one of the most visited Shakespeare websites in the
world. For over nine years he has written the annual review of editions and
textual studies for the Shakespeare Survey.

3. The RSC Shakespeare: The Complete Works

4. The RSC Shakespeare: The Complete Works

5. The RSC Shakespeare: The Complete Works

6. The RSC Shakespeare: The Complete Works