Articoli correlati a Fabian:Time and the Other (Paper)

Fabian, J. Fabian:Time and the Other (Paper)

Fabian:Time and the Other (Paper) 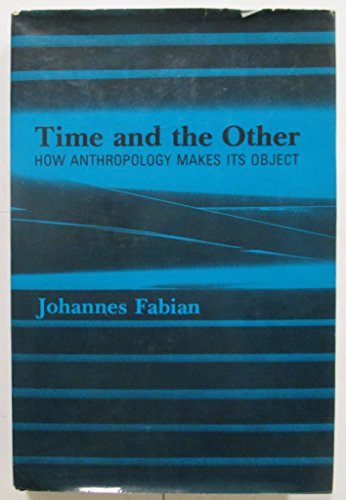 1. Time and the Other: How Anthropology Makes Its Object

Descrizione libro Columbia University Press, 1983. hardcover. 1st edition. New York. 1983. Columbia University Press. 1st American Edition. Previous Owner's Name Penned in Front, Otherwise Very Good in Slightly Worn Dustjacket with Some Small Tears. ISBN:0231055900. 205 pages. hardcover. Jacket design by J.S. Roberts. FROM THE PUBLISHER - Anthropological theory, from its beginnings in philosophy and linguistics, has provided Western thought and politics with deep-rooted images and convictions amounting to a kind of political cosmology. The anthropologists are here and now, the objects of their discourse are there and then, and the existence of the other -the savage, the primitive, the under-developed world-in the same time as ours is regularly denied. This is the central thesis of Johannes Fabian s TIME AND THE OTHER, a probing critique of the emergence and present shape of anthropological discourse. Fabian examines uses of time in dominant paradigms of contemporary anthropology, in the praxis and semiotics of conducting research and writing anthropological discourse, and the theory of knowledge. He argues that Time, much like language and money, is a carrier of significance, a form through which we define the content of relations between the Self and the Other. Moreover, Time may give form to relations of power and inequality under the conditions of capitalist industrial production. TIME AND THE OTHER provides a view behind the scenes of anthropology. It suggests rules for the critical use of anthropology while contesting the idea that ethnology produces knowledge of the other which may simply be applied in other fields. inventory #35601 Previous Owner's Name Penned in Front, Otherwise Very Good in Slightly Worn Dustjacket with Some Small Tears. Codice articolo z35601

2. Time and the Other

Descrizione libro Columbia University Press 1983-01-01, 1983. Hardcover. Condizione: Good. No Jacket. 1st. Item is in good condition. Some moderate creases and wear. This item may not come with CDs or additional parts including access codes for textbooks. This may not have a dust jacket. Might be an ex-library copy and contain writing/highlighting. Photos are stock pictures and not of the actual item. Codice articolo DS-0231055900-3