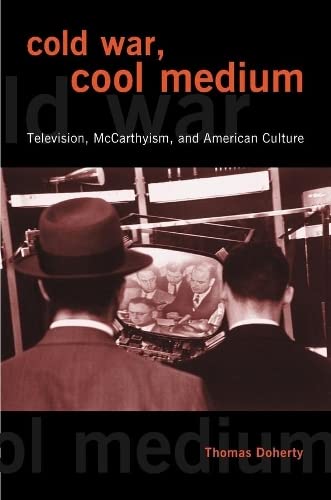 Conventional wisdom holds that television was a co-conspirator in the repressions of Cold War America, that it was a facilitator to the blacklist and handmaiden to McCarthyism. But Thomas Doherty argues that, through the influence of television, America actually became a more open and tolerant place. Although many books have been written about this period,Cold War, Cool Medium is the only one to examine it through the lens of television programming.

To the unjaded viewership of Cold War America, the television set was not a harbinger of intellectual degradation and moral decay, but a thrilling new household appliance capable of bringing the wonders of the world directly into the home. The "cool medium" permeated the lives of every American, quickly becoming one of the most powerful cultural forces of the twentieth century. While television has frequently been blamed for spurring the rise of Senator Joseph McCarthy, it was also the national stage upon which America witnessed--and ultimately welcomed--his downfall. In this provocative and nuanced cultural history, Doherty chronicles some of the most fascinating and ideologically charged episodes in television history: the warm-hearted Jewish sitcomThe Goldbergs; the subversive threat from I Love Lucy; the sermons of Fulton J. Sheen onLife Is Worth Living; the anticommunist series I Led 3 Lives; the legendary jousts between Edward R. Murrow and Joseph McCarthy onSee It Now; and the hypnotic, 188-hour political spectacle that was the Army-McCarthy hearings.

By rerunning the programs, freezing the frames, and reading between the lines,Cold War, Cool Medium paints a picture of Cold War America that belies many black-and-white clichés. Doherty not only details how the blacklist operated within the television industry but also how the shows themselves struggled to defy it, arguing that television was preprogrammed to reinforce the very freedoms that McCarthyism attempted to curtail.

Thomas Doherty is a professor in the American studies department and chair of the film studies program at Brandeis University. He is the author ofProjections of War: Hollywood, American Culture, and World War II; PreCode Hollywood: Sex, Immorality and Insurrection in American Cinema, 1930-1934; andTeenagers and Teenpics: The Juvenilization of American Movies in the 1950s, and is associate editor of the film journalCinéaste.

Descrizione libro 2003. Condizione: NEW. 9780231129527 This listing is a new book, a title currently in-print which we order directly and immediately from the publisher. For all enquiries, please contact Herb Tandree Philosophy Books directly - customer service is our primary goal. Codice articolo HTANDREE02137949