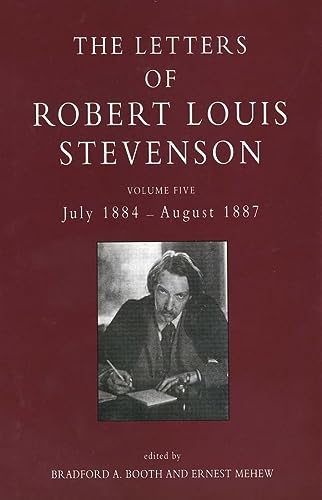 Robert Louis Stevenson, long recognized as a master storyteller and essayist, was also one of the finest and most delightful of letter writers. Yale University Press is now publishing the definitive edition of Stevenson's collected letters in eight handsomely produced volumes. The edition will contain nearly 2,800 letters, only 1,100 of which have been published before.

Volumes III and IV cover the period from August 1879 to June 1884. The six hundred letters tell for the first time the full story of Stevenson's reckless journey to California as an "amateur emigrant," during which he gained a wife but wrecked his health. They describe his return to Europe and his futile search to improve his health in Scotland, Switzerland, and France and reveal interesting aspects of the writing of Treasure Island, Virginibus Puerisque (his first volume of collected essays), and many poems later collected in Underwoods and in A Child's Garden of Verses.

Volumes V and VI cover the period from July 1884 to September 1890 and comprise over nine hundred letters. During this time, Stevenson lived as a chronic invalid for three years in Bournemouth, England; searched for improved health in the United States and the South Seas; and achieved fame and success with the Strange Case of Dr. Jekyll and Mr. Hyde, Kidnapped, and A Child's Garden of Verses. The letters convey Stevenson's courage and gaiety in the face of illness and his affection for his family and friends. They also reveal the devoted care given him by his wife, Fanny Stevenson.

Bradford A. Booth, who was professor of English at the University of California at Los Angeles and who died in 1968, originated this project. Ernest Mehew, who has worked on this edition for more than twenty-five years, is widely recognized as the leading authority on Stevenson's life and work.