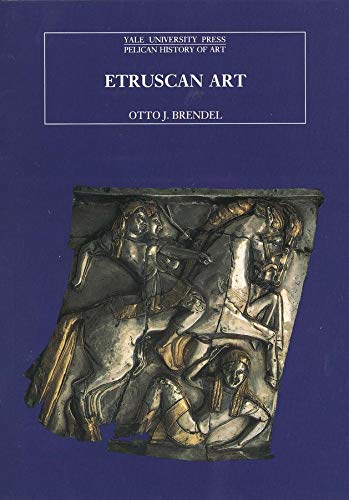 This volume—the first serious book in English on Etruscan art—was hailed for its broad scope, thorough knowledge, and clear exposition when it was published almost twenty years ago. Now brought back into print with an updated bibliography and bibliographical essay by Francesca R. Serra Ridgway, it remains an essential introduction for anyone interested in ancient art, history, and civilization.

Otto Brendel's exploration of the art, culture, and society of Etruria takes us through its four main periods of creativity: the Villanovan and Orientalizing era, the Archaic era, the Classical era, and the Hellenistic era, when Etruscan art became extinct. According to Brendel, the Etruscans were deeply influenced by Greek styles but used Greek forms and concepts to further their own purposes. Etruscan art is a private art, aristocratic and luxurious but centered in the life of the family and a continuing life in the tomb. Many of the art forms and objects discussed—ceramics, metalware, jewelry, sculpture, and wall painting—are known to us through the discovery of tombs. Most of these objects had a clearly defined function but were also designed, with a high degree of quality and craftsmanship, to be decorative. The beautiful art of the Etruscans, illustrated and explained in this book, sheds much light on a people about whom we know little.

L'autore:
Otto J. Brendel held many academic positions in Europe and the United States, the last of which was as a professor at Columbia University, and he was the author of many fundamental books on ancient art. He died in 1973. Francesca R. Serra Ridgway is an honorary fellow in the department of classics at the University of Edinburgh.
Product Description:
Book by Brendel Otto J