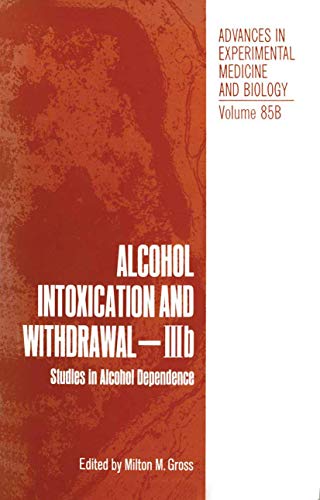 Dr. Milton M. Gross, the editor of these volumes, died on July 29, 1976, after a brief illness. As chairman of the section on Biomedical Research in Alcoholism of the I.C.A.A., he had plan- ned and brought to fruition the international "Symposium on Alcohol Intoxication and Withdrawal" which had taken place in Lausanne the month before. He was particularly proud of the distinguished group of scientists he had helped to assemble and was eagerly looking for- ward to the publication of these proceedings which he hoped would extend our understanding of the phenomenology of alcoholism. Milton Gross was a most unusual man in the extent and range of his activities and accomplishments. He was a certified psy- chiatrist and psychoanalyst, a recognized clinical researcher, the author of more than fifty scientific papers, and the editor of three important volumes on alcohol intoxication and withdrawal. He was extremely active in the scientific world of alcoholism as planner and coordinator of three international conferences, as chairman of the section on Biomedical Research of the I.C.A.A., and as a member of a W.H.O. Task Force on Alcoholism. In addition, he was very active in a variety of scientific and service committees in national and local organizations.

of Volume III B.- Section VII. Relevance of Animal Models of Physical Dependence to the Alcohol Dependence Syndrome in Humans.- 1. Prevention of Ethanol Withdrawal Seizures in Mice by Local Anesthetics and Dextro-Propranolol.- 2. Comparison of Ethanol Withdrawal Syndrome in Humans and Rats.- 3. Barbiturate Withdrawal Syndrome in Cats.- 4. Alcohol Withdrawal Reactions in Rhesus Monkeys.- 5. Alcohol Withdrawal Syndromes in the Human: Comparison with Animal Models.- Section VIII. Comparative Mechanisms of Tolerance to and Dependence on Alcohol, Barbiturates, and Opiates.- 1. Alterations of Macromolecule Biosynthesis after Chronic Administration of Opiates and Ethanol.- 2. On the Possibility that Opiate and Ethanol Actions are Mediated by Similar Mechanisms.- 3. A Comparative Analysis of the Effects of Narcotics, Alcohol and the Barbiturates on the Hypothalamic-Pituitary-Gonadal Axis.- 4. Neuronal Aspects of Opiate Dependence and Tolerance in Comparison to Central Depressants.- 5. Opiate Receptors and Endogenous Opioid Peptides in Tolerance and Dependence.- 6. Role of Catecholamines in the Development of Tolerance to Barbiturates and Ethanol.- 7. Comparative Aspects of Tolerance to, and Dependence on, Alcohol, Barbiturates, and Opiates.- Section IX. Additional Studies in Non-Human Animals.- 1. Effects of Alcohol on Ganglion Cell Receptive Field Properties and Sensitivity in the Frog Retina.- 2. Persistence of Brain Hyperexcitability Following Chronic Alcohol Exposure in Rats.- 3. Alteration of Ethanol Preference in Hamsters: Effects of Photoperiod and 5-Hydroxytryptophan.- 4. Behavioral Changes after Chronic Ethanol Treatment.- 5. Comparison of the Effects of Alcohol, Chlordiazepoxide, and ?9-Tetrahydrocannabinol on Intraspecies Aggression in Rats.- 6. The Temporal and Volumetric Components of Stress Induced Drinking in Rats.- 7. Physiological and Behavioral Normalizing Actions of a Single Alcohol Dose in Mice.- 8. The Effects of Sodium Phenobarbital on Voluntary Ethanol Consumption in Rats.- Section X. Additional Studies In Humans.- 1. Interaction of Alcohol with Psychological Stress.- 2. The Effect of Low Dose Intravenous Alcohol on Human Information Processing.- 3. Alcohol and Interpersonal Aggression.- 4. Drinking Practices and Cognitive Functioning.- 5. Sleep in alcoholic Patients: Longitudinal Findings.- 6. The Toxicity of Ethanol: A Tentative Risk Evaluation.- 7. Introduction to the Papers on Operant Conditioning and Alcohol Intake.- 8. Metabolic and Endocrine Pathology During Hangover.- Section XI. Operant Conditioning and Alcohol Intake.- 1. Drinking of Ethanol by Rhesus Monkeys: Experimental Strategies for Establishing Ethanol as a Reinforcer.- 2. Animal Model of Alcoholism: Critique and Progress.- 3. Self-Administration of Sedatives by Humans.- 4. Chronic Alcohol Drinking and Subsequent Withdrawal in Rats Exposed to Different Diurnal Distributions of Schedule-Induction Sessions.- 5. Pharmacological Influences Upon Human Ethanol Self-Administration.- 6. Temporal Patterns of Voluntary Alcohol Intake.- Section XII. Craving and Alcohol Intake.- 1. The Dipsogenic Effect of Alcohol and the Loss of Control Phenomenon.- 2. Craving for Alcohol: Role of Drinking Pattern, Psychosocial History, Cognitive Style, Motor Control and Personality Variables.- 3. Physiologic and Situational Determinants of Drinking Behavior.- 4. Assessing the Alcoholic’s Disposition to Drink.- 5. Cue Exposure: One Approach to the Extinction of Addictive Behaviours.- 6. Thirst, Alcohol Thirst, and Control.

Descrizione libro Plenum Publishing Company Limited. Hardcover. Condizione: Very Good. A copy that has been read, but remains in excellent condition. Pages are intact and are not marred by notes or highlighting, but may contain a neat previous owner name. The spine remains undamaged. At ThriftBooks, our motto is: Read More, Spend Less. Codice articolo G0306390868I4N00