Articoli correlati a The Deadly Dance 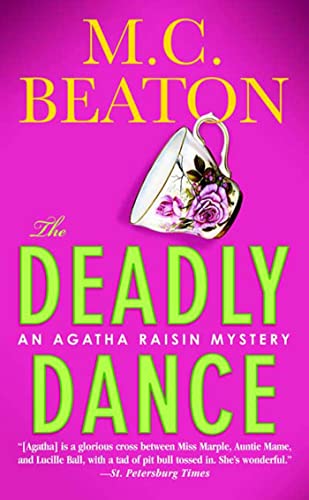 Bossy, impulsive, and unlucky in love, the all-too-human Agatha Raisin has proved to be a surprisingly effective---and endearing---amateur sleuth. But can Agatha make it as a private investigator? After getting mugged on vacation, in what she will always think of as the Paris Incident, she decides to find out.

Agatha soon learns that running her own detective agency in the Cotswolds is not quite like starring in a Raymond Chandler movie. Instead of dames in distress with big shoulder pads, her clients are ladies with missing cats and a man whose son has run off with his car. Agatha even worries that she might be outclassed by her sixty-seven-year-old secretary, Emma Comfrey.
But then wealthy divorcée Catherine Laggat-Brown walks in with their first "real" case. Mrs. Laggat-Brown's daughter has received a death threat, and when Agatha thwarts an attack on the girl at a dinner dance, she recognizes an opportunity to show what Raisin Investigations can do. Even better, the case gives her a chance to reunite with her long-absent friend, Sir Charles Fraith. As they scour the Cotswolds in search of leads, Charles' insights prove invaluable and his charms irresistible, leading poor Emma to fall madly in love with him.

As ever, Agatha bumbles her way through the case, trying her friends' patience and flirting shamelessly with the chief suspect. Will she put her tiny agency on the map, or has even the outrageous Agatha finally bitten off more than she can chew?

M. C. Beaton is the author of fourteen previous Agatha Raisin novels, the Hamish Macbeth series, and an Edwardian mystery series written as Marion Chesney. She currently divides her time between Paris and the English Cotswolds.

Infuriated that her holiday was ruined by a mugging, Agatha Raisin decides to open up her own detective agency. The romance-minded sleuth is thrilled by visions of handsome fellow gumshoes and headline-making crimes—but soon finds the only cases she can get are a non-glamorous lot of lost cats and an errant teenager. But when a wealthy divorcée hires the agency to investigate a death threat against her daughter Cassandra, Agatha thwarts a vicious attack on the heiress bride. Now Agatha is in hot pursuit of the culprit. But when the groom’s father turns up dead, Agatha must untangle a growing list of suspects, from Carsely’s quiet village lanes to Paris’ most fashionable streets. Soon the willfully undaunted Agatha is in trouble with French and British police; on the outs (again) with old friends—and dead in the sights of a murderer.

“I simply love mysteries that have all the requirements necessary to make them great—the characters, the action, the plots, and that thing we call humanity. Beaton has them allin
spades.”
--Tulsa World