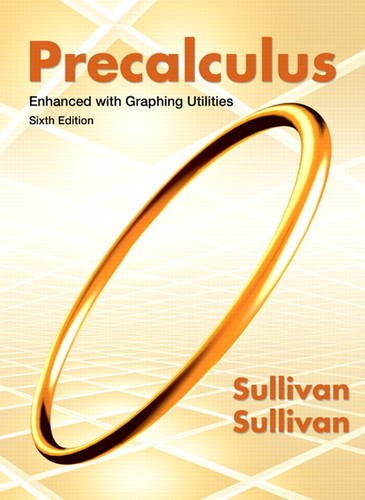 Michael Sullivan’s time-tested approach focuses students on the fundamental skills they need for the course:preparing for class, practicing with homework, and reviewing the concepts. TheEnhanced with Graphing Utilities Serieshas evolved to meet today’s course needs by integrating the usage of graphing calculator, active-learning, and technology in new ways to help students be successful in their course, as well as in their future endeavors.

Michael Sullivan, Emeritus Professor of Mathematics at Chicago State University, received a Ph.D. in mathematics from the Illinois Institute of Technology. Mike taught at Chicago State for 35 years before recently retiring. He is a native of Chicago’s South Side and divides his time between a home in Oak Lawn IL and a condo in Naples FL.

Mike is a member of the American Mathematical Society and the Mathematical Association of America. He is a past president of the Text and Academic Authors Association and is currently Treasurer of its Foundation. He is a member of the TAA Council of Fellows and was awarded the TAA Mike Keedy award in 1997 and the Lifetime Achievement Award in 2007. In addition, he represents TAA on the Authors Coalition of America.

Mike has been writing textbooks for more than 35 years and currently has 15 books in print, twelve with Pearson Education. When not writing, he enjoys tennis, golf, gardening, and travel.

Mike Sullivan III is a professor of mathematics at Joliet Junior College. He holds graduate degrees from DePaul University in both mathematics and economics. Mike is an author or co-author on more than 20 books, including a statistics book and a developmental mathematics series. Mike is the father of three children and an avid golfer who tries to spend as much of his limited free time as possible on the golf course.