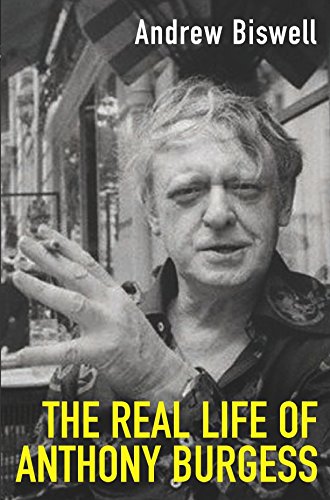 The first comprehensive life of English novelist, critic, and composer Anthony Burgess, author of A Clockwork Orange. Admired worldwide for his literary novels, including the masterpiece Earthly Powers, Anthony Burgess also achieved notoriety for the ultra-violent shocker, A Clockwork Orange. In this new biography, Andrew Bisswell charts Burgess' life from his solitary and motherless childhood to his triumphant emergence as a writer, critic, and composer. He also casts new light on Burgess' complicated relationship with director Stanley Kubrick, looks with sensitivity at his tempestuous first marriage, and explores his erotic entanglements with Graham Greene and William Burroughs. Drawing on extensive interviews, unpublished writings, letters, and diaries, The Real Life of Anthony Burgess reveals both the writer and the man as never before.

The first comprehensive life of this major writer and extraordinary man.

Andrew Biswell wrote his doctoral thesis on Anthony Burgess’s fiction and journalism, and is now a lecturer in the English department at Manchester Metropolitan University. He has previously worked as a fiction critic for the T.L.S, Daily Telegraph, Scotsman and Scotland on Sunday. He lives in Manchester and Aberdeenshire.

2. The Real Life of Anthony Burgess

Descrizione libro Macmillan UK, 2006. Hardback. Condizione: Very Good. The book has been read, but is in excellent condition. Pages are intact and not marred by notes or highlighting. The spine remains undamaged. Codice articolo GOR002562983

3. The Real Life of Anthony Burgess

Descrizione libro Picador, 2005. Hardcover. Condizione: Very Good. The Real Life of Anthony Burgess This book is in very good condition and will be shipped within 24 hours of ordering. The cover may have some limited signs of wear but the pages are clean, intact and the spine remains undamaged. This book has clearly been well maintained and looked after thus far. Money back guarantee if you are not satisfied. See all our books here, order more than 1 book and get discounted shipping. . Codice articolo 7719-9780330481700

4. The Real Life of Anthony Burgess

Descrizione libro Picador, London England, 2005. Cloth. Condizione: Near Fine. Condizione sovraccoperta: Near Fine. First Edition. Hardcover. First Edition. The Real Life of Anthony Burgess. Slightly rolled spine. The author's biography is the first to make sense of Burgess's life and works in a comprehensive way. It takes in the full range and variety of his writings and looks at his early influences, his chaotic sexual life and the repercussions - both literary and philosophical - of the loss of his Catholic faith. Drawing on extensive interviews, unpublished manuscripts, letters and diaries, this book reveals both the professional writer and the private man as he has never been seen before. Illustrated. 435 pp. (We carry a wide selection of titles in The Arts, Theology, History, Politics, Social and Physical Sciences. Academic and Scholarly books and Modern First Editions ,and all types of Educational Reference Literature.) Size: 8vo - over 7ľ" - 9ľ" Tall Octavo. Hardcover. Codice articolo 107246

5. The Real Life of Anthony Burgess

Descrizione libro Macmillan UK, 2006. Condizione: Good. A+ Customer service! Satisfaction Guaranteed! Book is in Used-Good condition. Pages and cover are clean and intact. Used items may not include supplementary materials such as CDs or access codes. May show signs of minor shelf wear and contain limited notes and highlighting. Codice articolo 0330481703-2-4