Articoli correlati a House of Many Gods

Davenport, Kiana House of Many Gods

House of Many Gods 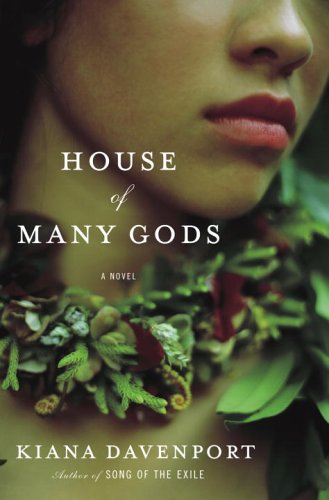 Working with the injured following a devastating hurricane on the island of Kauai, Ana, a physician abandoned by her mother and raised by poor, native Hawaiian relatives, has a fateful encounter with Niki, a Russian documentary filmmaker with his own turbulent and deprived past. By the author of Song of the Exile. 15,000 first printing.

Praise for Kiana Davenport’s Song of the Exile

“Reading this novel is an overwhelming experience. . . . Davenport’s prose is sharp and shining as a sword, yet her sense of poetry and love of nature permeate each line.”
–Isabel Allende

“What separates [Song of the Exile] from its genre . . . is its intensity of feeling, its body of sensuous detail present on every one of its pages, and its dedication to a level of writing very few bestsellers possess.”
–Norman Mailer

“Song of the Exile transports the reader into an often-magical world by the power of its story. Its language is at times a song, and sometimes a cry in the dark. . . . Davenport’s imagination and vision will haunt you for a long time.”
–Chicago Tribune

Of Native Hawaiian and Anglo American descent, Kiana Davenport is the author of the bestselling novels Shark Dialogues and Song of the Exile. She has been a Bunting Fellow at Harvard, a Visiting Writer at Wesleyan University, and a Recipient of a National Endowment for the Arts Grant. Her short stories have won numerous O. Henry Awards, Pushcart Prizes, and the Best American Short Story Award in 2000. She lives in New York City and Hawaii.

1. House of Many Gods: A Novel

2. House of Many Gods: A Novel

3. House of Many Gods: A Novel