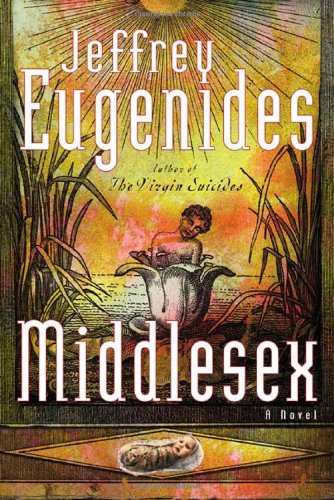 Calliope's friendship with a classmate and her sense of identity are compromised by the adolescent discovery that she is a hermaphrodite, a situation with roots in her grandparents' desperate struggle for survival in the 1920s. By the author of The Virgin Suicides.75,000 first printing.

L'autore:
Jeffrey Eugenides was born in Detroit, Michigan, in 1960, the third son of an American-born father whose Greek parents emigrated from Asia Minor and an American mother of Anglo-Irish descent. Mr. Eugenides was educated at public and private schools, graduated from Brown University, and received an M.A. in English and Creative Writing from Stanford University in 1986. Two years later, in 1988, he published his first short story.

Mr. Eugenides' first novel, The Virgin Suicides (FSG), was published in 1993. His fiction has appeared in The New Yorker, The Paris Review, The Yale Review, Best American Short Stories, The Gettysburg Review, and Granta. His many awards include fellowships from the Guggenheim Foundation and the National Endowment for the Arts, a Whiting Writers' Award, and the Harold D. Vursell Award from the American Academy of Arts and Letters. In the past few years he has been a Fellow of the Berliner Künstlerprogramm of the DAAD and of the American Academy in Berlin. Mr. Eugenides now lives in Berlin, Germany, with his wife and daughter.
Product Description:
Copertina e pagine interne in condizioni eccellenti - Used in excellent condition [cant]

Descrizione libro Soft cover. Condizione: New. ADVANCED READER'S EDITION. SIGNED ON THE TITLE PAGE by EUGENIDES - ADVANCE READER'S COPY - NEW & UNREAD - no flaws or defects - SOFTCOVER IN PICTIRIAL WRAPS - A VERY COLLECTIBLE COPY OF THIS ARC - Author's second novel, winner of the Pulitzer Prize. PHOTOS OF THE ACTUAL BOOK SENT UPON REQUEST. THIS IS AN INTRODUCTORY PRICE FOR OUR GRAND RE-OPENING. ALL PRICES WILL BE ADJUSTED LATER TO REFLECT MARKET PRICES. ALL BOOKS HAVE BEEN BOXED IN CLIMATE CONTROLLED STORAGE AND HAVE NOT BEEN TOUCHED BY ANY OTHER HUMAN THAN ME FOR AT LEAST THE LAST 10 YEARS - ALL BOOKS ARE SEALED AND BUBBLE WRAPPED AND SHIPPED IN BOXES - YOU CAN BUY HERE WITH CONFIDENCE KNOWING THAT A BUNCH OF STRANGERS HAVE NOT HANDLED YOUR BOOK -. Signed by Author(s). Codice articolo 005322