Articoli correlati a The Discworld Graphic Novels: The Colour of Magic and...

The Discworld Graphic Novels: The Colour of Magic and The Light Fantastic: 25th Anniversary Edition 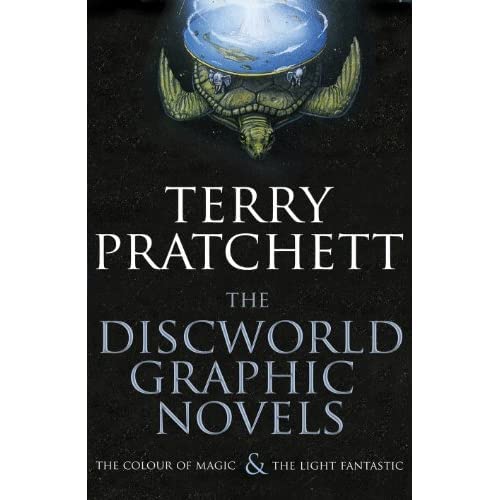 Imagine a flat world, sitting on the backs of four elephants, who hurtle through space balanced on a giant turtle. The Discworld is a place (and a time) parallel to our own - but also very different. That is the setting for Terry Pratchett's phenomenally successful Discworld series, which now celebrates its 25th anniversary.

The Discworld Graphic Novels presents the very first two volumes of this much-loved series in graphic novel form. First published fifteen years ago, these fully illustrated versions are now issued for the first time in hardback. Introduced here are the bizarre misadventures of Twoflower, the Discworld's first ever tourist, and possibly - portentously - its last, and his guide Rincewind, the spectacularly inept wizard.Not to mention the Luggage, which has a mind of its own.

For the 25th anniversary of Discworld, the first two novels in graphic novel form.

Descrizione libro Transworld Publishers Ltd, 2008. Hardcover. Condizione: Very Good. All orders are dispatched the following working day from our UK warehouse. Established in 2004, we have over 500,000 books in stock. No quibble refund if not completely satisfied. Codice articolo mon0005462916

2. The Discworld Graphic Novels: The Colour of Magic & The Light Fantastic