Articoli correlati a Our Man in Havana

Greene, Graham Our Man in Havana

Our Man in Havana 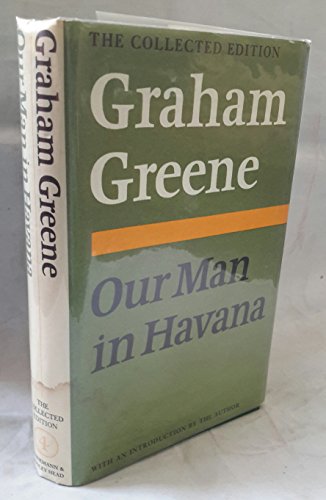 Mr. Wormold, a vacuum cleaner salesman, was short of money. His daughter had reached an expensive age -- so he accepted Hawthorne's offer of $300-plus a month and became Agent 59200/5, M.I.6's man in Havana. To keep the job, Wormold pretends to recruit sub-agents and sends fake stories. Then the stories start becoming disturbingly true. "From the Trade Paperback edition."

“Graham Greene had wit and grace and character and story and a transcendent universal compassion that places him for all time in the ranks of world literature.” — John Le Carré

“He had a sharp nose for trouble and injustice. In Our Man in Havana — a witty send-up of an agent’s life — it was Cuba before Castro.” — Financial Times
From the Trade Paperback edition.

Graham Greene (1904–1991) worked as a journalist and critic, and was later employed by the foreign office. His many books include The Third Man, The Comedians and Travels with My Aunt. He is the subject of an acclaimed three-volume biography by Norman Sherry.
From the Trade Paperback edition.

1. Our Man in Havana (The collected edition)

Descrizione libro William Heinemann Ltd, 1970. Hardcover. Condizione: Used; Good. Dispatched, from the UK, within 48 hours of ordering. This book is in good condition but will show signs of previous ownership. Please expect some creasing to the spine and/or minor damage to the cover. Grubby book may have mild dirt or some staining, mostly on the edges of pages. Ex-library book with stamps on the first page, it is also likely to have a small shelf number sticker on the spine. Codice articolo CHL6179750

2. Our Man in Havana (The collected edition)

Descrizione libro Hardback. Condizione: Very Good. The book has been read, but is in excellent condition. Pages are intact and not marred by notes or highlighting. The spine remains undamaged. Codice articolo GOR004565496

3. Our Man in Havana (The collected edition)

Descrizione libro Hardback. Condizione: Fair. A readable copy of the book which may include some defects such as highlighting and notes. Cover and pages may be creased and show discolouration. Codice articolo GOR002308275

4. Our Man in Havana (The collected edition)

Descrizione libro Hardback. Condizione: Good. The book has been read but remains in clean condition. All pages are intact and the cover is intact. Some minor wear to the spine. Codice articolo GOR003249294