Articoli correlati a Fried Green Tomatoes at the Whistle Stop Cafe: A Novel

Fried Green Tomatoes at the Whistle Stop Cafe: A Novel 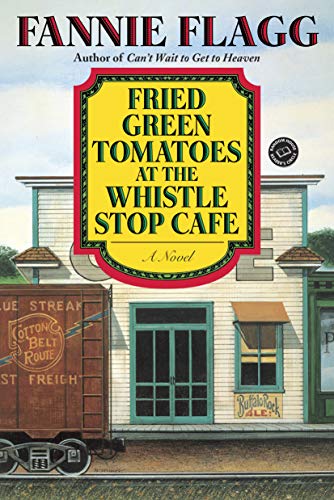 Folksy and fresh, endearing and affecting, Fried Green Tomatoes at the Whistle Stop Cafe is the now-classic novel of two women in the 1980s; of gray-headed Mrs. Threadgoode telling her life story to Evelyn, who is in the sad slump of middle age. The tale she tells is also of two women--of the irrepressibly daredevilish tomboy Idgie and her friend Ruth--who back in the thirties ran a little place in Whistle Stop, Alabama, a Southern kind of Cafe Wobegon offering good barbecue and good coffee and all kinds of love and laughter, even an occasional murder. And as the past unfolds, the present--for Evelyn and for us--will never be quite the same again...

"Airplanes and television have removed the Threadgoodes from the Southern scene. Happily for us, Fannie Flagg has preserved a whole community of them in a richly comic, poignant narrative that records the exuberance of their lives, the sadness of their departure. Idgie Threadgoode is a true original: Huckleberry Finn would have tried to marry her!"
--Harper Lee, Author of To Kill a Mockingbird

"A real novel and a good one... [from] the busy brain of a born storyteller."
--The New York Times

"The people in Miss Flagg's book are as real as the people in books can
be. If you put an ear to the pages, you can almost hear the characters
speak. The writer's imaginative skill transforms simple, everyday events
into complex happenings that take on universal meanings."

"This whole literary enterprise shines with honesty, gallantry, and love
of perfect details that might otherwise be forgotten."

"Watch out for Fannie Flagg. When I walked into the Whistle Stop Cafe she
fractured my funny bone, drained my tear ducts, and stole my heart."

Fannie Flagg began writing and producing television specials at age
nineteen and went on to distinguish herself as an actress and a writer in
television, films, and the theater. Her first novel, Daisy Fay and The
Miracle Man, spent ten weeks on the New York Times paperback
bestseller list, and her second novel, Fried Green Tomatoes at the
Whistle Stop Cafe, was on the same list for thirty-six weeks. It was
produced by Universal Pictures as the feature film Fried Green
Tomatoes. Flagg's script was nominated for both the Writers Guild of
America and an Academy Award, and it won the highly regarded
Scripters Award. Flagg narrated both novels on audiocassette and
received a Grammy Award nomination for Best Spoken Word.

Her latest novel is titled Welcome to the World, Baby Girl! She lives
in California and Alabama.