Articoli correlati a Bricklin on Technology 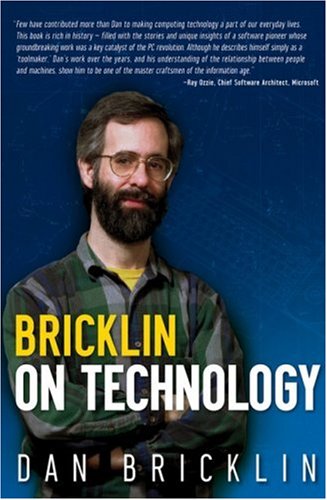 In a world that divides us, technology creates connection. Cell phones, e-mail, digital cameras, personal Web sites—they all join us, however tenuously, to what we value. Is connectivity what we’re willing to pay for? Should technology be our servant or a tool that helps us do other things? What can we really learn from Napster? What would intelligent standards for touch-screen user interface look like? How does technology evolve, and what drives that evolution?

For Dan Bricklin, technology cannot exist independently of the lives and needs of those who use it. For more than a decade he has shared his thoughts on this essential interdependence in blogs, podcasts, and essays. This volume compiles those observations, putting together case histories and new reflections for a fascinating study of how people and technology affect one another. Whether you’re a software developer or a student of human nature, you’ll find yourself drawn into this most intriguing discourse—because you are its subject.

Inventor, entrepreneur, and longtime blogger Dan Bricklin explores a diverse collection of subjects in this book. From the personal conversations of commuters heading home to those of warriors guiding missiles . . . from music to gesture recognition on the Apple iPhone . . . from the American Revolution to today's political conventions . . . from nuclear power plants to simple tools used by millions . . . this is technology at the human level.

"As co-creator of VisiCalc, the first computerized spreadsheet, Dan Bricklin literally created the PC industry. To a student of software, VisiCalc is the embodiment of so many novel and important ideas in software, lessons which are still relevant today."
?Joel Spolsky, Joel on Software

"Nobody knows more than Dan about what technology is, where it's been and where it's going. If I only had one book of technology in my library, this would be it."
?Doc Searls, coauthor, The Cluetrain Manifesto

"Dan Bricklin was one of the first programmers to focus more on what's in the user's head than on what's in the programmer's head. VisiCalc foreshadowed the single most important idea: Don't 'tell' the computer what you want; show it! Dan Bricklin . . . is still showing rather than telling, and in this anecdotal yet insightful book, he does another excellent job of it. . . ."
?Esther Dyson, EDventure Holdings

"Dan Bricklin was at the heart of the personal computer revolution, and he kept learning and participating in technology's ongoing evolution. Now, with his new book, he helps us understand the most important part of this change: Humanity is creating a collaborative sphere of vast power and scale."
?Dan Gillmor, Director of the Knight Center for Digital Media Entrepreneurship at the Walter Cronkite School of Journalism and Mass Communication, Arizona State University