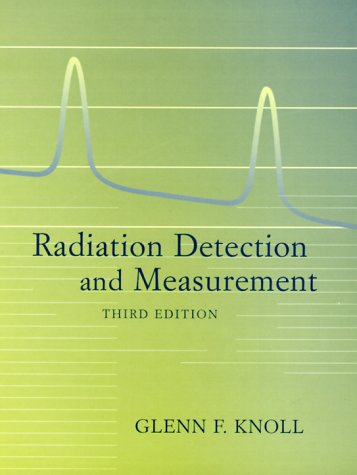 A Classic Text on Radiation Detection and Measurement Now Updated and Expanded Building on the proven success of this widely-used text, the Third Edition will provide you with a clear understanding of the methods and instrumentation used in the detection and measurement of ionizing radiation. It provides in-depth coverage of the basic principles of radiation detection as well as illustrating their application in a full set of modern instruments. In addition to a complete description of well-established detection and spectroscopic methods, many recently developed approaches are also explored. These include extensive new discussions of semiconductor detectors with unique properties, recently developed scintillation materials and photomultiplier tubes, and several gas-filled detectors of new design. Many other updates and additions have been made throughout the text and two appendices have been added. Over 100 new figures and tables have been included. Key Features of the Third Edition
* Every chapter has been updated with extensive addition of new references to relevant articles in the scientific literature.
* A number of new detection techniques have been added, strengthening the status of the text as the most comprehensive coverage of the topic to be found in any single book.
* The writing style has maintained the readability that has attracted favorable response from readers and reviewers of the earlier editions.
* The author uses his extensive research experience in radiation measurements, nuclear instrumentation, and radiation imaging to provide you with an invaluable resource.

GLENN FREDERICK KNOLL is Professor of Nuclear Engineering and Radiological Sciences in the College of Engineering at the University of Michigan. Following his undergraduate education at Case Institute of Technology, he earned a Master's degree from Stanford University and a doctorate in Nuclear Engineering from the University of Michigan. During his graduate work, he held national fellowships from the Atomic Energy Commission and the National Science Foundation.
He joined the Michigan faculty in 1962, and served as Chairman of the Department of Nuclear Engineering from 1979 to 1990 and as Interim Dean of the College of Engineering from 1995-96. He held appointments as Visiting Scientist at the Nuclear Research Center in Karlsruhe, Germany and as Senior Fellow in the Department of Physics at the University of Surrey, U.K. His research interest have centered on radiation measurements, nuclear instrumentation, and radiation imaging. He is author or co-author of over 140 technical publications, 8 patents, and 2 textbooks.
He has been elected a Fellow of the American Institute for Medical and Biological Engineering, the American Nuclear Society, and the Institute of Electrical and Electronics Engineers. He has been selected to receive three national awards given annually to a single recipient for achievements in engineering and education: the 1979 Glenn Murphy Award from the American Society for Engineering Education, the 1991 Arthur Holly Compton Award of the American Nuclear Society, and the 1996 Merit Award of the IEEE/Nuclear and Plasma Sciences Society. He is one of five receiving editors of Nuclear Instruments and Methods in Physics Research, Part A, and a past or present member of the Editorial Boards for Nuclear Science and Engineering, IEEE Transaction on Medical Imaging, and Physica Medica. In 1999, he was elected to membership in the National Academy of Engineering. He has served as consultant to 25 industrial and government organizations in technical areas related to radiation measurements, and is a Registered Professional Engineer in the State of Michigan.