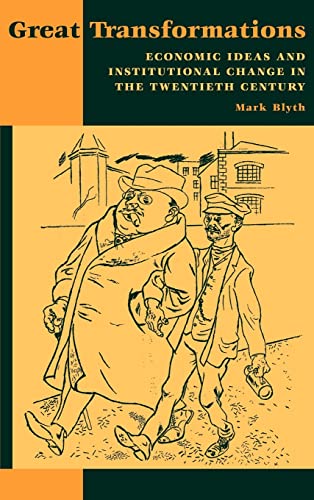 This book picks up where Karl Polanyi's study of economic and political change left off. Building upon Polanyi's conception of the double movement, Blyth analyzes the two periods of deep seated institutional change that characterized the twentieth century: the 1930s and the 1970s. Blyth views both sets of changes as part of the same dynamic. In the 1930s labor reacted against the exigencies of the market and demanded state action to mitigate the market's effects by 'embedding liberalism.' In the 1970s, those who benefited least from such 'embedding' institutions, namely business, reacted against these constraints and sought to overturn that institutional order. Blyth demonstrates the critical role economic ideas played in making institutional change possible. Great Transformations rethinks the relationship between uncertainty, ideas, and interests, achieving profound new insights on how, and under what conditions, institutional change takes place.

'Great Transformations is a significant book in at least two ways. First, it extends academic debate about the causes of change in wealthy capitalist countries in important ways ... Second, and more important, Great Transformations dissects profound changes in the state that leave many millions of individuals much more vulnerable ... Those hostile to granting ideas a role in political explanation will have to engage with Blyth's framework, the mark of an important scholarly work.' West European Politics

This book analyses political and economic change in the United States and Sweden from the 1920s to the end of the 1990s. The key claim is that economic ideas are political tools used by domestic groups in order to effect change.

Descrizione libro 2002. Hardback. Condizione: NEW. 9780521811767 This listing is a new book, a title currently in-print which we order directly and immediately from the publisher. For all enquiries, please contact Herb Tandree Philosophy Books directly - customer service is our primary goal. Codice articolo HTANDREE0477257