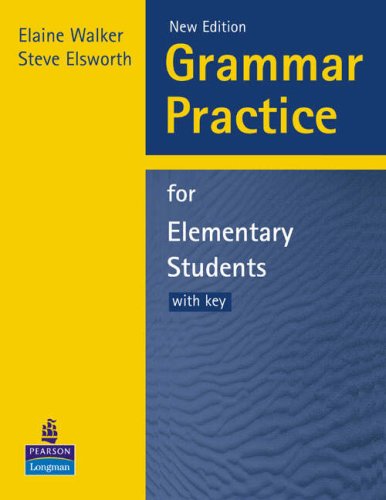 * Step-by-step grammar explanations with clear examples * A wealth of varied practice exercises with write-in space on the page * Tests to monitor students' progress * Illustrated with lively cartoons to increase students' understanding * An index and a comprehensive contents list for easy reference * For self-study, homework or use in class.

Steve Elsworth has a BA and an MA in English from Lancaster University. He started his career teaching English in Turkey in 1977, a time which also included writing materials and working with Turkish Radio. On his return to the UK, Steve taught for two years at International House, London. He also spent time in Oran, Algeria, setting up an English programme at the Institute of Telecommunications, Steve has taught short-term courses in English for Accountancy at the European Business School, London.

Steve Elsworth is the author of over twenty-five ELT titles, including material for the best-selling Longman courses, Discoveries and Strategies. In the mid-1980s, Steve took time off from ELT, writing for various newspapers on acid rain and air pollution. He worked as an environmental consultant for, among others, the Swedish and Canadian governments, and wrote two books on the environment during this period, Acid Rain (1984) and A Dictionary of the Environment (1990). Steve worked for Greenpeace as a Campaign Director from 1988 to 1992, a period which gave him extensive media experience.

Steve is now a full-time writer of ELT materials. With Jim Rose, he is the successful author of ‘Go!’ and ‘Energy’.

Descrizione libro LONGMAN/PEARSO 2000-01-01, 2000. Paperback. Condizione: Good. Item is in good condition. Some moderate creases and wear. This item may not come with CDs or additional parts including access codes for textbooks. Might be an ex-library copy and contain writing/highlighting. Photos are stock pictures and not of the actual item. Codice articolo DS-0582417066-3