Articoli correlati a Leonardo's Mountain of Clams and the Diet of Worms:...

Gould, Stephen Jay Leonardo's Mountain of Clams and the Diet of Worms: Essays on Natural History

Leonardo's Mountain of Clams and the Diet of Worms: Essays on Natural History 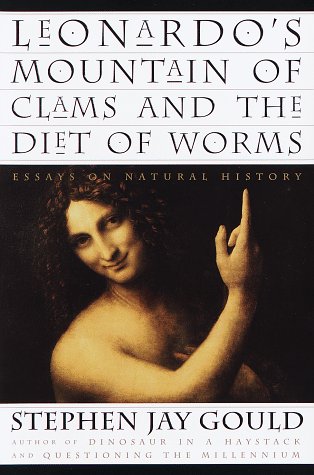 The latest collection of the popular paleontologist's essays from Natural History magazine explores the puzzles and paradoxes both great and small inherent in the diversity of nature and humanity and how scientists grapple with them. 60,000 first printing.

Stephen Jay Gould is the Alexander Agassiz professor of zoology and professor of geology at Harvard and the Vincent Astor visiting professor of biology at New York University. Recent books include Full House, Dinosaur in a Haystack and Questioning the Millennium.He lives in Cambridge, Massachusetts, and New York City.

Morgan describes his despair as their captors string up King Arthur for a hanging: "They were blindfolding him! I was paralysed; I couldn't move, I was choking, my tongue was petrified . . . They led him under the rope." But, in the best cliff-hanging traditions, and at the last conceivable instant, Sir Lancelot comes to the rescue with five hundred knights--all riding bicycles. "Lord, how the plumes streamed, how the sun flamed and flashed from the endless procession of webby wheels! I waved my right arm as Lancelot swept in. I tore away noose and bandage, and shouted: 'On your knees, every rascal of you, and salute the king! Who fails shall sup in hell to-night!'"

I am not citing either Monty Python or Saturday Night Live, and I didn't mix up my genders in the first sentence. The speaker is not Morgan le Fay (who, no doubt, would have devised a magical, rather than a technological, solution to the same predicament), but Hank Morgan, the Connecticut Yankee in King Arthur's court, and the hero in Mark Twain's satirical novel of the same name. Morgan, transported from nineteenth-century Hartford, wreaks mayhem in sixth-century Camelot by introducing all manner of "modern" conveniences, including tobacco, telephones, baseball--and bicycles.

As a literary or artistic device, anachronism exerts a powerful hold upon us, and has been a staple of all genres from the highest philosophy to the lowest comedy--as Jesus is crucified in a corporate boardroom by Dali, condemned at his Second Coming by Dostoyevsky's Grand Inquisitor, but only offered a half-price discount (as he changes to modern dress) by the Italian barber or the Jewish tailor of various ethnic jokes, now deemed tasteless and untellable.

Anachronism works this eerie and potent effect, I suppose, because we use the known temporal sequence of our history as a primary device for imposing order upon a confusing world. And when "the time is out of joint. O cursèd spite," we really do get discombobulated. We also know that correction of a perceived time warp cannot be achieved so easily in real life as in magical fiction (where Merlin can put Hank Morgan to sleep for 1,300 years, or Dracula can be dispatched with a wooden stake driven into the right spot). We regard Hamlet's blithe confidence as a mark of his madness when he completes his rhyming couplet with the Shakespearean equivalent of "no sweat" or "hakuna matata": ". . . That ever I was born to set it right!"

Science, for reasons partly mythical, but also partly accurate and honorable, presents itself as the most linear and chronologically well ordered of all disciplines. If science, working by fruitful and largely unchanging methods of reason, observation, and experimentation, develops progressively more accurate accounts of the natural world, then history provides a time line defined by ever-expanding success. In such a simple linear ordering, mediated by a single principle of advancing knowledge, any pronounced anachronism must strike us as especially peculiar--and subject to diametrically opposite judgment depending upon the direction of warp. An ancient view maintained in the present strikes us as risible and absurd--the creationist who wants to compress the history of life into the few thousand years of a literal biblical chronology, or the few serious members of the Flat Earth Society. But a "modern" truth, espoused out of time by a scholar in the distant past, fills us with awe, and may even seem close to miraculous.

A person consistently ahead of his time--a real-life Hank Morgan who could present a six-shooter to Julius Caesar, or explain the theory of natural selection to Saint Thomas Aquinas--can only evoke a metaphorical comparison with a spaceman from a more advanced universe, or a genuine angel from the realms of glory. In the entire history of science, no man seems so well qualified for such a designation as Leonardo da Vinci, who died in 1519, but filled his private notebooks with the principles of aeronautics, the mental invention of flying machines and submarines, and a correct explanation for the nature of fossils that professional science would not develop until the end of the eighteenth century. Did he have a private line across the centuries to Einstein, or even to God Himself?

I must confess that I share, with so many others, a lifelong fascination for this man. I was not a particularly intellectual child; I played stickball every afternoon and read little beyond comic books and school assignments. But Leonardo captured my imagination. I asked, at age ten or so, for a book about his life and work, probably the only intellectual gift that I ever overtly requested from my parents. As an undergraduate geology major, I bought the two-volume Dover paperback edition of Leonardo's notebooks (a reprint of the 1883 compilation by Jean Paul Richter) because I had read some of his observations on fossils in the Leicester Codex, and had been stunned not only by their accuracy, but also by their clear statement of paleoecological principles not clearly codified before our century, and still serving as a basis for modern studies.

Leonardo remains, in many ways, a frustrating and shadowy figure. He painted only about a dozen authenticated works, but these include two of the most famous images in our culture, the Mona Lisa (in the Louvre) and the Last Supper (a crumbling fresco in Milan). He published nothing in his lifetime, despite numerous and exuberant plans, though several thousand fascinating pages of manuscript have survived, probably representing only about a quarter of his total output. He did not hide his light under a bushel and was, in life, probably the most celebrated intellectual in Europe. Dukes and kings reveled in his conversation and his plans for war machines and irrigation projects. He served under the generous patronage of Europe's most powerful rulers, including Ludovico il Moro of Milan, the infamous Cesare Borgia, and King Francis I of France.

Leonardo's notebooks did not become generally known until the late eighteenth century, and were not published (and then only in fragmentary and occasional form) until the nineteenth century. Thus, he occupies the unique and peculiar role of a "private spaceman"--a thinker of preeminent originality, but whose unknown works exerted no influence at all upon the developing history of science (for nearly all his great insights had been rediscovered independently before his notebooks came to light).

The overwhelmingly prevailing weight of public commentary about Leonardo continues to view him as Western cultures primary example of a "spaceman," that is, as a genius so transcendent that he could reach, in his own fifteenth century, conclusions that the rest of science, plodding forward in its linear march to truth, would not ascertain for several hundred years. Leonardo stood alone and above, we are told over and over again, because he combined his unparalleled genius with a thoroughly modern methodology based on close observation and clever experiment. He could therefore overcome the ignorance and lingering sterile scholasticism of his own times.

For example, the "Introductory Note" in the official catalog for a recent exhibition of the Leicester Codex in New York summarizes the basis of Leonardo's success in these words: "In it [the codex] we can begin to see how he combined almost superhuman powers of observation with an understanding of the importance of experimentation. The results were inspired insights into the workings of nature that match his artistic achievements." When such conventional sources acknowledge the persisting medieval character of many Leonardian pronouncements, they almost always view this context as a pure impediment to be overcome by observation and experiment, not as a matrix that might have been useful to Leonardo, or might help us to understand his beliefs and conclusions. For example, the closing passage of the long Encyclopaedia Britannica article on Leonardo states: "Leonardo approached this vast realm of nature to probe its secrets . . . The knowledge thus won was still bound up with medieval Scholastic conceptions, but the results of his research were among the first great achievements of the thinking of the new age because they were based on the principle of experience."

I think that this conventional view could not be more wrong in its general approach to the history of knowledge, or more stultifying for our quest to understand this most fascinating man of our intellectual past. Leonardo did make wonderful observations. He did often anticipate conclusions that public science would not reach for another two or three centuries. But he was neither a spaceman nor an angel--and we will never understand him if we insist on reading him as Hank Morgan, a man truly out of time, a modernist among the Medici, a futurist in the court of Francis the First.

1. Leonardo's Mountain of Clams and the Diet of Worms: Essays on Natural History

2. Leonardo's Mountain of Clams and the Diet of Worms: Essays on Natural History

3. Leonardo's Mountain of Clams and the Diet of Worms: Essays on Natural History

4. Leonardo's Mountain of Clams and the Diet of Worms: Essays on Natural History

5. Leonardo's Mountain of Clams and the Diet of Worms: Essays on Natural History Gould, Stephen Jay

6. Leonardo's Mountain of Clams and the Diet of Worms: Essays on Natural History Gould, Stephen Jay