Articoli correlati a Race of a Lifetime: How Obama Won the White House

Race of a Lifetime: How Obama Won the White House 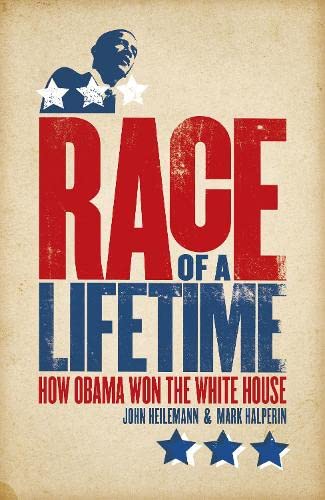 Forget everything you think you know about the making of the most powerful man on the planet. President Barack Obama's triumph was not inevitable: it was the end product of a brilliant, calculated, convention-defying political campaign. In a race that will be talked about for years to come, he faced down his rivals with ruthless focus and efficiency.

Race of a Lifetime is the gripping inside story of those thrilling months: from the meteoric rise of Obama and the collapsing House of Clinton to the erratic John McCain and the bewildering Sarah Palin.

Brimming with exclusive revelations, this compulsively readable book lays bare the characters of the candidates, warts and all; exposes the inner workings of their operations; and charts the true path to the White House. It's a tour de force: the sometimes shocking, often funny, and ultimately definitive account of the campaign of a lifetime.

This book is published in the US under a different title, GAME CHANGE.

The classic account of an epic presidential race... A book that reads like the fevered dream that everyone even remotely involved in the campaign insists it was - longer, more intense, more significant and peopled with vastly more fascinating candidates than any presidential race in living memory. Small wonder that HBO bought the film rights nine months before publication. (Giles Whittell The Times)

Race of a Lifetime is sleazy, personal, intrusive, shocking - and horribly compulsive. It is also thoroughly researched, well-paced and occasionally very amusing. Anyone who follows American politics will want to read it. (The Economist)

A spicy smorgasbord of observations, revelations and allegations... The authors mix savvy political analysis with detailed reconstructions of scenes and conversations. They employ the same sort of technique Bob Woodward pioneered in his bestselling books to create a novelistic narrative.
[Race of a Lifetime] leaves the reader with a vivid, visceral sense of the campaign and a keen understanding of the paradoxes and contingencies of history.

THE book to read about the election... Three modern presidential campaigns produced riveting, definitive chronicles: 1960 (The Making of the President), 1968 (The Selling of the President) and 1988 (What It Takes). Now there's a fourth great campaign book, about 2008: Race of a Lifetime. (Kurt Andersen Very Short List) L'autore:

John Heilemann and Mark Halperin are two of the most acclaimed political reporters in the United States, with unrivalled access to the presidential candidates and their teams throughout the campaign. John Heilemann is the national political correspondent and columnist for New York magazine. He is a National Magazine Award finalist, and a former staff writer for the New Yorker, the Economist, and Wired. Mark Halperin is editor-at-large and senior political analyst for Time, founding editor of The Page on time.com, and former political director of ABC News.

1. Race of a Lifetime: How Obama Won the White House